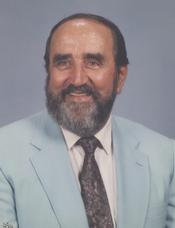 Edi Nagel of Wilmington passed away at his home on Monday, July 30, 2012. Edi was born on November 1, 1926 in Oberlauhstien, Germany to Nikolaus Ambrosius and Emma Christine Zulauf Nagel. Edi is survived by his wife, Eris Carr Nagel, his daughter Maureen Irick, her husband William Irick, Jr., and their two daughters Christine and Hayley; he is also survived by his sister Katharina Elisabeth who still resides in Germany. Eduard is preceded in death by his siblings Margarete Emma Luise, Johann Nikolaus, Adolf Josef, Anna Maria Appolonia, and Emma Christine.

After finishing a traditional German education, Edi spent his years before the war as a machinist in Germany. He enlisted in the German Navy and served aboard a U-boat and a mine sweeper during WWII. After being captured by the French, Edi spent years fighting in Vietnam and Africa with the French Foreign Legion. Once his service was completed, Edi returned to Germany for the first time in 8 years, married, and eventually immigrated to Montreal, Canada in 1957. Edi stayed in Montreal for 10 years. After falling in love with Wrightsville Beach while on a family vacation, he decided it was time for a change; Edi and his family immigrated to the United States and moved to Wilmington in 1968. He worked for Wilmington Iron Works, Southeastern Machine and Welding Co., and Ackermann Machine Shop.

Edi spent his retirement traveling the world with his wife, taking family vacations with his daughter and grand-daughters, and joining numerous clubs like the Elks Lodge, the local Submariners club, WWII club, and German club. He loved keeping active with his exercise classes at the Senior Center. Until his last days, Edi spent his time with family and friends, telling them stories of his life and imparting words of wisdom he gathered from his many world travels throughout his 85 years of life. Eduard was a member of Oak Grove Presbyterian Church where services will be held 1:00 PM, Saturday, August 4, 2012. Reverend Harold Manning will officiate.