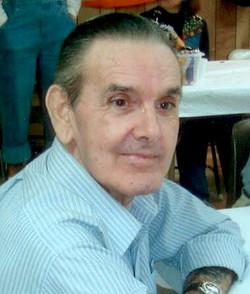 He was born in Wilmington, NC, on October 31, 1934, the son of the late Bennie and Mary (Sullivan) Green and was preceded in death by two sisters, Mary Ann Whitworth and Jean Henderson, a brother, Bennie Green Jr. and a grandson, Austin Ryan Green.

A loving husband with 46 years of marriage to his wife Carolyn, he was a father, grandfather, and great grandfather who enjoyed spending time with his family, fishing and searching for treasures with his metal detector.

Mr. Green was a brick mason with over 50 years of service to the community and was a member of the Delco Pentecostal Free Will Baptist Church.

Funeral services will be conducted 11am Saturday, October 30, 2010, at Delco Pentecostal Free Will Baptist Church, 283 Kaiser Road, Delco, NC by the Rev. Michael Owens. Burial will follow in Delco Cemetery.

The family will receive friends from 6:30 – 8:30 pm on Friday, October 29, 2010, at the home of William and Sue Skipper and one hour prior to the service at Delco Pentecostal Free Will Baptist Church