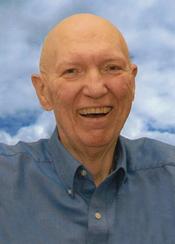 Born at home in Greenville, NC May 30, 1938 to Jessie Mae and Ralph Leo Tucker. Leo was brought up in Norfolk, VA where his parents had moved during World War II to seek employment. He graduated from Maury High School in 1956. After receiving an Associate Arts degree from Old Dominion University, he continued his education at Virginia Tech, earning a Bachelor of Science degree in Electrical Engineering in 1961.

After graduating from college Leo was hired by IBM Corporation in the Manufacturing Division at Endicott, NY. He left Endicott in 1964 to pursue a Masters Degree in Electrical Engineering at North Carolina State University. After graduating he joined IBM at the Research Triangle Park location in the Product Development area. He retired in 1991 with 30 years of service.

After retirement, Leo and his wife Patricia moved from Raleigh to Boone, NC where they lived until 2004 and then moved to Wilmington, NC. During retirement they traveled to many countries, including Canada, England, France, Germany, Italy, Spain and all 50 States.

In 1998 Leo began a medical journey with the blood disease Myelodysplastic Syndrome. He was determined to defeat it if possible and fought valiantly for 15 years. He was willing to take treatments that might help or cure him and he did so with a positive attitude. Leo’s friends and family provided him with loving support as he walked this difficult path with determination and dignity.

Leo was predeceased by his parents and his brother Jimmy Ralph Tucker.

In addition to his wife of 44 years, Patricia, Leo leaves behind many friends and family who will miss his kind manner and quick wit, including his sister-in-law Judy Samalack (Joe) of Mesa, AZ and brother-in-law Allan Rummery (Nancy) of Winnipeg, Manitoba. He also leaves two special aunts: Frances Townsend, New Bern, NC; Edna Earl Rogers (Jimmy), Norfolk, VA; and two special cousins: Janice Spivey, Winterville, NC and Patsy Ann Hawley (Dean), Raleigh, NC. He was loyal to his friends and devoted to his family.

Leo often said he was blessed with good doctors. Special thanks are given to Dr. Kenneth Kotz and his staff at Cape Fear Cancer Specialists and to Dr. Scott Visser and his staff at Wilmington Family Physicians for their concerned and compassionate care. Special thanks also to Leo’s Hospice Nurse Kelli Yohe, Social Worker Jean Gieschan, and Hospice Volunteer Jeanne Bua who is also a friend and neighbor.

In lieu of flowers memorial gifts may be given to Lower Cape Fear Hospice Foundation, 1414 Physicians Drive, Wilmington, NC 28401.

A Celebration of Life ceremony will be held 2 PM Saturday December 14, 2013 at Wilmington Funeral Chapel. A reception for family and friends will follow the services.