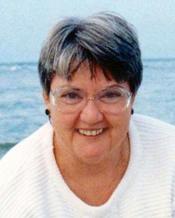 Eleanor Louise Dunne, 86, passed away in her home in Wilmington on Thursday, January 16, 2014

Eleanor was born in Merrick, New York on June 1, 1927. She married the late George Richard Dunne in 1948 and they lived in Smithtown, New York, before relocating to Wrightsville Beach in 1971.

Her passions included animals, playing bridge, knitting, and spending time with her family. She enjoyed daily walks with her dog, Kaylee, along the UNCW trails behind her house.

A celebration service is being held today, January 21, between 11 am and 1 pm at Wilmington Funeral Chapel, 1535 S. 41st Street.

In lieu of flowers, the family requests that donations be made to the Guide Dog Foundation for the Blind located in Smithtown, New York
Please share memories and condolences with the family by clicking on the “Sign Guest Book” tab above.