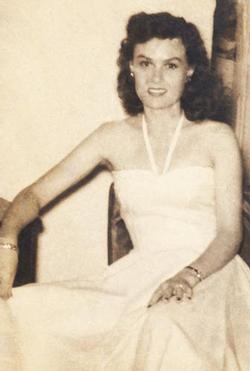 Elizabeth Watson, at age 90, passed away at Lower Cape Fear Hospice on Thursday, October 23, 2014. To know her was to love her.

Elizabeth was the third child born to Archie and Eunice Register on September 11, 1924. She grew up in Goldsboro, NC where she attended Brogden School. After graduation she went to work at Woolworths and it was there she met her husband, Airman John Roland Watson, Jr. who was stationed at Seymore Johnson Air Force Base, who later retired as Major. They were married September 26, 1942 and spent 56 happy years together as “best friends”. Jack, as he was called, was in the Army Air Force and they traveled for 20 years throughout the United States as well as Taiwan and Philippines.

Elizabeth and Jack had one daughter the late Dana Elease Watson Piraux. They have one grandson, John Piraux.

Surviving siblings are Omer Allen Register (Dorothy Ann), Annie Carole Morgenstern, Jerry Daly Register (Linda) and Richard Worth Register (Shirley). She was preceded in death by Leonard Franklin Register, lris Evelyn Johnson, Dorothy Eunice Hankins, Cecil Keith Register and Douglas Delano Register. As one of ten children, she leaves a host of nieces and nephews.
Since 2007, Elizabeth lived at Spring Arbor of Wilmington where she was loved and received excellent care. The family wishes to thank the staff for their attention given to Elizabeth who suffered from dementia in the final years of her life.

A Celebration of Life will be held at Wilmington Funeral and Cremation from 2 to 4 pm Saturday, October 25, 2014. Interment will be in Mountain Home National Cemetery in Johnson City, Tennessee.

In lieu of flowers memorials may be made to Lower Cape Fear Hospice Foundation, 1401 Physicians Dr., Wilmington, NC 28401.

Elizabeth lived a life full of love and kindness to everyone she knew and also to the many dogs that were blessed to belong to her family.

Words to Live By

Keep your heart free from hate,
your mind free from worry,
live simply,
expect Iittle,
give much,
scatter sunshine,
forget self,
think of others.