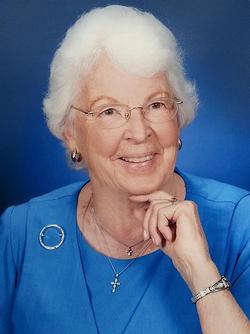 I, Eloise Griffith Hoffman Stoddard of Leland, NC went home to be with my Lord and Savior Jesus Christ on Tuesday, September 10, 2014. I was born in Utica, NY on December 27, 1921, the daughter of Robert and Nellie Jennings Griffith, the oldest child of ten children. I attended school in New Hartford, NY and at the age of 15 went to an evangelistic service with my mother where I met my future husband, Howard John Hoffman. We continued our friendship and were married in February 1939. I am survived by my sister Elizabeth Harris (Frank) of Utica, three brothers: Gordon Griffith (BettyJane) of New Hartford, Gerald Griffith (Jackie) of Canada/FL, Roger Griffith (Beryl) of Sauquoit and predeceased by one sister Shirley Croasmun (John) and three brothers, Robert Griffith (Carmella), William Griffith, Raymond Griffith, Richard Griffith.

I leave my four children: Paul Richard Hoffman (Betty) of Clendennin, WV, Howard John Hoffman Jr. (Jeab) of Coraopolis, PA, Gary Wayne Hoffman (Carmen) of Huntington Beach, CA, Barbara Jean (Pugliese Graham) Grabowski (Bill) of Leland, NC with whom I resided until my death. My husband Howard Sr. went to be with Jesus on October 29, 1980. I remarried September 12, 1981 to Edward H. Stoddard in New York Mills. Ed went to be with Jesus February 23, 1998. We lived in Ocala, FL together for 18 years and I a total of 26 years. I also leave Ed’s daughters (and they became my daughters) Sandy Spartaro Akatay (Tan) of Hanover, MA and Suzanne Stoddard (deceased 2011.)

A graveside service will be held in Clinton, NY with my family and friends, 11AM October, 4, 2014 at Crown Hill Cemetery, 3620 State Route 12, Clinton, NY 13323. The family requests in lieu of flowers a donation may be made to your local Hospice or Billy Graham Evangelical Association,1 Billy Graham Parkway, Charlotte, NC 28201-0001 or BillyGraham.org. Contact Barbara at [email protected] for further info, questions or comments.