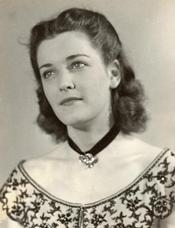 Born in Baltimore to Fannie Bell (Ostrom) and Alfred C. Arnold, Elsie Howe grew up in Philadelphia and White Plains, NY. She attended Moravian College before receiving a scholarship to study piano and voice at Julliard. In her final year at Julliard, Richard Rodgers cast her in the chorus of the original Broadway production of Oklahoma!, which opened to great acclaim on March 31, 1943. Known then by her maiden name, Elsie Arnold, she performed in the show for more than two years, and over one thousand performances. On March 31, 1993 she was one of eighteen members of the original company honored at a gala 50th anniversary celebration luncheon in New York City’s Rainbow Room.

Upon leaving Oklahoma! she sang with Phil Spitalny and his orchestra on his radio show, and with the NBC Symphony Chorus under Arturo Toscanini. She was also the musical director of the White Plains NY Gilbert and Sullivan Society.

After her marriage to Thomas L. Howe (d. 1989), she moved to Port Washington, NY, where she served as soloist for several Long Island churches and synagogues, founded and directed productions for a chamber opera company, and gave private piano lessons–all while raising seven children and maintaining active membership in St. Stephen’s Episcopal Church.

The family relocated to Annapolis, Maryland in 1966 and joined St. Anne’s Episcopal Church, where for years many of her children were members of the choir. Mrs. Howe performed with the Tom Thumb Players and Maryland Theatrical Productions Co., taught general music at Mayo Elementary School, directed the Mayo Methodist Church choir, and was the musical director for Annapolis High School’s 1973 production of Once Upon a Mattress.

She retired to Ocean City, MD and enjoyed ten years there before relocating to live with daughters in Platteville, WI, Hyattsville, MD, and Wilmington, NC. Over the years she helped to raise many of her grandchildren, who fondly knew her as “Grammy.”
She was a skilled bridge and Scrabble player, and always enjoyed sharing music with her many children and grandchildren.

A private memorial service will be held this summer.

In recognition of the role music played in her life, the family invites those wishing to honor Elsie C. Howe to donate in her name to VH1’s Save the Music Foundation: http://vh1savethemusic.com/give-tribute.