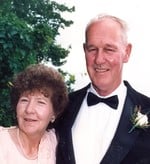 She was a legal secretary in NYC until the birth of her first child. Then she became a homemaker in CT. When the family moved to NY in 1960 she also ran the family farm. She was a member and former treasurer of the local chapter of National Farmers Organization. She retired in Florida with her husband in 1993. In 2007 Elsie moved to Wilmington NC to be closer to her daughter. Elsie was known for her kindness and generous heart. She also had a huge love for animals and will be missed dearly by her cats Rosie and Panda.

Elsie is the beloved mother and grandmother of two daughters and son-in-laws, Donna and John Hogan of Wilmington, NC and Lynn and Henry Stafford of Bradenton, FL, one son, Gary Peterson, Unadilla; and three grandchildren, Ryan and Nicolette Hogan and Jennifer Stafford.

There will be no visitation. A memorial service will be held at a later date, Elsie was buried in Evergreen Cemetery in Otego, NY.