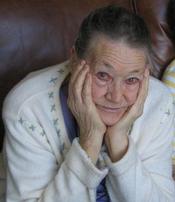 Callie Esther Dillon Spivey,
Aunt Esther passed away, peacefully at her home, Saturday, August 17, at the age of 95.

Having no children of her own, being the oldest of nine, born July 6, 1918, she was provided great experience to embrace all of us as, in some way, her responsibility. Aunt Esther was a firm example of hard work, hard love, hard lines and above all else, true selflessness.

It is rare that in this day and age we are witness to true acts of selflessness that include things like, leaving your home to go care for your younger sister, who was 74 at the time, who was in an accident; then to go to your younger brother’s home to help care for your sister-in-law; and finally to abandon your home once again, for what would turn out to be the last time, to care for your two sisters, one with Alzheimer’s. Giving up your home to move and care for other people as they pass through those inevitable gates takes a strength, conviction and love to which most of us can only hope to aspire. And that is only the stuff she did after she was 77 years old.

Before moving to Norfolk, in the mid 1950’s, Aunt Esther lived and worked in Charleston, SC, then moved with her family to Wilmington, building and starting Dillon’s Grocery in Sunset Park.

A retired civilian from the US Navy in Norfolk, Virginia, Aunt Esther always said, “When I worked and I thought about retiring, I would always daydream about all of the things I would be able to get done with all of that free time. Now I wonder how I ever had time to work.”

She sewed, quilted, crocheted, cooked, cleaned, laundered, raked, shoveled, shucked, snapped, ordered, barked, demanded and crossword-puzzled on a daily basis. She was quite possibly the most lovable, cantankerous sort with whom you may have ever been lucky enough to cross paths.

Aunt Esther was always busy. She lived in a world where there was always something that could be done, and her time working with the military gave her an edge for being able to band together an infantry of children to help out. Like it or not, we all knew that in some way, we belonged to Aunt Esther and you better believe that when Aunt Esther said, “Shuck that corn!” or “Rake that yard!” or “What’s an eight letter word for a Cable TV Show, that may or may not have an ‘LL’ in the middle?” you best be about doing her bidding.

Aunt Esther had a witty, sarcastic, self-deprecating sense of humor that was lost on few and admired by many. Her personality was such that she didn’t laugh or smile often, but when she did, it was like the earth stopped for half a beat and all was right in the world.

She came from a different time, when people were smart instead of phones, when mail required a stamp, rather than the internet and when there was no question about what you should do, because the only thing that ever mattered was what needed to be done and who needed her presence, love and support in what moment of which day. That was how she answered to the needs of all of us at once.

After a set back in 2011, Aunt Esther spent the last two years in the care and companionship of her nephew and niece, Jimmy and Peggy Schupp, of Wilmington. They allowed themselves to follow the example set by Aunt Esther. herself, and have strived to keep her comfortable and content while caring for her.

Aunt Esther was preceded in death by her father and mother, Charley E. and Ella H. Dillon; her brothers Charles Dillon and Everett Dillon; and her sisters, Edna Schupp, Frances Smith and Naomi Strickland. She is survived by her siblings Ben Dillon, and wife, Becky of Raleigh; Cecil Dillon of Chesapeake, VA; and Evelyn Perry of Chesapeake, VA.

Aunt Esther leaves behind generations of nieces and nephews far and wide and coast to coast. I am sure most of us will curl up with one of our, “Made Especially For You by Esther” quilts tonight as homage to a phenomenal woman, who by some crazy stroke of divine intervention, we were fortunate enough to call “Aunt Esther”.

There were few things in this world that Aunt Esther believed could not be fixed with a simple needle and thread. Turns out, the unmistakable void derived of her absence is definitively one of those things.

Her legacy is not contained within the confines of her family. Aunt Esther was a well loved and well respected member of the Christ’s Sanctified Holy Church and will be laid to rest at the Church Campground in Perry, Georgia.

The family will receive friends, TONIGHT, Sunday, August 18 from 7pm until 9pm at Wilmington Funeral and Cremation on 41st Street in Wilmington.

Final Interment will be Tuesday, August 20 in Perry, Georgia; officiated by Henry Price and Gene Mustin of the Christ’s Sanctified Holy Church.

The family would like to extend their deepest gratitude to Dr. Mary Rudyk of the Senior Center, WellCare of Wilmington and Lower Cape Fear Hospice for doing everything possible to ensure Aunt Esther spent her final days in peace and comfort.

As her great-great niece, Kaylen Petteway, would say, in all of her infinite, 3-year-old wisdom, when we leave from visiting Aunt Esther, “Bye Aunt Esther. I love you. I’m gonna miss you like crazy!”

As will we all.