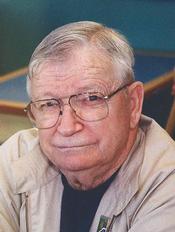 He was born in Harnett County, NC on April 8, 1926 to the late Joseph Evander Godwin and Geneva Maude Tew Godwin. He was preceded in death by his brothers, Howard, Jerome, Paul, John, Oliver, and Louis Godwin and a sister, Elise Marie Godwin.

Evander was a member of Winter Park Baptist Church. He was a member and a Past Master of Wilmington Lodge # 319, A.F. & A.M., Wilmington Scottish Rite Bodies, Wilmington York Rite Bodies, Sudan Shrine Temple, and AREME Chapter #372 OES. Evander was well known in many Masonic lodges, and very proud of delivering the Masonic Funeral Service Lecture at funeral services for his Masonic brethren from his lodge as well as many other lodges in this Masonic district.

Evander worked with his brother John at Farmers Supply for many years and later with General Electric. After his retirement, he devoted much of his time to Masonic affairs, enjoyed watching all sports on television, and was an active member of the Walking Club at Independence Mall.

Funeral services will be held 11 am Tuesday, May 1, 2012 at Winter Park Baptist Church. Entombment will be at Greenlawn Memorial Park Mausoleum. Masonic Rites will be accorded by Wilmington Lodge # 319, A.F. & A.M.

The family will see friends one hour prior to the service at the church.

The family request in lieu of flowers memorials be made to Winter Park Baptist Church, 4700 Wrightsville Ave., Wilmington, NC 28403.

A special thanks to Dr. William Buchanan for the care given to Evander.