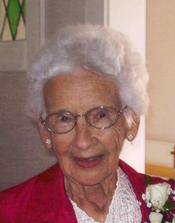 Mae Frances Durham McClaughry died peacefully on December 21, 2012 with her family by her side.

Frances was born May 15, 1919 in Bath County, Virginia to Lena Folks Durham and Joseph Edward Durham. She had six brothers who have all preceded her in death.

Frances grew up in Bath County and moved to Bluemont, Virginia when she married Garland Thomas McClaughry on July 27, 1945. They were married for fifty-two years prior to his death on April 24, 1997. They have three daughters: Ruth M. Merritt and husband Bob, of Wilmington; Lynn M. Kraly and husband Harry, of Wilmington; and Joyce M. Williams and husband Tom, of Asheville.

“Frankie” or Grandma Frank”, as she was lovingly called, also had six grandchildren and five great grandchildren: Michele Maxwell and husband Brian (Emily and Nolan) of Durham; Amy Griffiths and husband, Matt (Zack and Finley) of Wilmington; Joel Merritt and wife, Alice (Addisyn) of Raleigh; Drew Kraly of Wilmington; Travis Williams of Greenville, NC and Caitlin Williams of Tryon.

Frankie was a member of the Berryville Presbyterian Church for more than 60 years, serving as Deacon and Elder. After moving to Wilmington, she attended First Baptist Church.

Frankie moved to Wilmington in 2008 and moved into Brightmore in March of 2009. She was excited about her new home and enjoyed participating in many activities offered there. She made many dear friends whom she treasured.

Everyone who knew Frankie enjoyed her sense of humor, admired her steadfast faith, and loved her joyful and accepting spirit.

Her family would like to thank Brightmore for making Frankie’s last years so enjoyable and Lower Cape Fear Hospice who cared for her and for her family the last days of her life.

Memorials may be made to Lower Cape Fear Hospice, 1414 Physicians Drive, Wilmington, NC 28403.