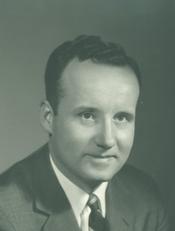 Frank was born on October 19, 1928 in Philadelphia, Pennsylvania. The son of the Late Mae McGrath amd Frank J. Croke Sr. He served his country faithfully in World War II as a Lieutenant in the Army and was a recent participant in an Honor Flight to Washington, DC. He started a lifelong love of sailing as a boy aboard the Gloucester Fishing Fleet, became First Mate of the three-masted schooner “Sea Gypsy.” He later raced as Navigator aboard “Wandelaar” and as owner of “Diana”.

An alumnus of Boys Central High School, Manhattan College (NY) and Harvard Business School. He retired after 25 years as an IBM executive. He was an Adjunct Professor of Business at Dowling College. He authored several books and articles on personal and business finance.

A funeral Mass will be held 10:00 AM, Friday August 5, 2011 at Saint Mary Catholic Church with a reception after the service.

In lieu of flowers, donations may be made to Tileston Health Clinic, 1605 Doctors Circle Wilmington, NC 28401.