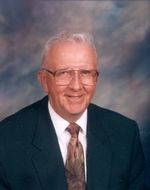 Fred served in the Air Force in the Korean War and was a graduate of Eastern New Mexico University. He worked for IBM for 32 years in various technical and management positions. While with IBM he spent 3 years in South Africa working on banking networks. He returned to the United States to work on developing the control segment of the Global Positioning Satellite System (GPS). He ended his career as Technical Sales Consultant for banking systems in the Far East and Latin America. Fred was an avid golfer and a member of Olde Pointe Country Club and Coastal Carolina Seniors. He was a member of Hampstead United Methodist Church and the Men’s Association and the Coastal Carolina Walk to Emmaus.

Fred was preceded in death by his sisters Henrietta Turner and Isabella Russell and brothers George and Bill Pledger.