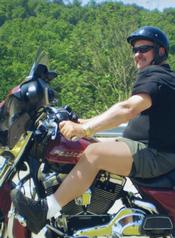 Fred lived life fully one day at a time and believed to thine own self be true. He carried this message in his pocket every day for over 32 years.

He rode his Harley like an eagle soars on the wind. Enjoying the freedom his Harley provided him.
Fred was warm hearted and loving. Always there to lift up, love and support his family and friends. He never judged only loved.
He was a member of the Leland Business Association.

Preceded in death by his father Kenneth Cowan and his sister Shelene McCathney. He is survived by his mother Veronica Rochon and sister Carol Klouse of Michigan, daughter Kristine McKay of North Carolina, son Frederick James Cowan II of Colorado, son Brian Edward Cowan Sr. and his wife Marcy of Florida, and daughter Deborah Ann Gresty and husband Jason of Maryland.

Fred is also survived by many nieces and all of their children.

The family will receive friends following the service.

In lieu of flowers the family would like donations to be made in the name of Frederick Cowan by mailing them to St. Jude’s Children Research Hospital, 262 Danny Thomas Place, Memphis, TN 38105 or calling 800-822-6344.