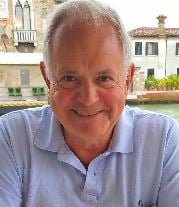 George Bernard Pidot, Jr. passed away on November 27 after a valiant fight with congestive heart failure.  He was born on July 30, 1940 in New York to George Pidot, Sr. and Virginia Ulrich Pidot.  As a boy he attended Friends Academy in Locust Valley, New York and Philips Andover Academy in Andover, MA, where he graduated in 1958.   He went on to study economics at Princeton University, graduating in 1961 and earned  a PhD in Economics from Harvard University in 1966.

He enjoyed an exciting and varied career in the academic world at Dartmouth College, Temple University, and the State University of New York at Stony Brook.  He ended his career as Vice Chancellor of the public college system in Chicago.  He and his wfe Joan retired to Wilmington, NC in 1998.

After retirement he pursued his love of sailing.  His last boat was a 40 foot Cabo Rico, which he and Joan sailed for many months along the eastern seaboard.  When sailing was no longer possible, they traveled via other kinds of boats, including Star Clipper voyages in the Caribbean and Greece, and many Viking River Boat cruises throughout Europe.  He loved his church, his family fine wine, good books’ the Sunday Times crossword puzzle and traveling via riverboat through Europe, especially if the trip ended in Paris.

In retirement George believed strongly in giving back for his many blessings, spending many hours in volunteer work.  He taught Bible studies at Wesley Memorial United Methodist Church, served as a Stephen Minister, and occasionally enjoyed giving the Sunday morning children’s sermon.

He was a Hospice volunteer s and coordinated their Meals of Love Program at Wesley.  He especially enjoyed tutoring first graders, first at Holly Tree Elementary and then at Winter Park Elementary School, where he was known as Mr. George.   He served as coordinator at Mother Hubbard’s Cupboard the fourth Saturday of every month.  He also volunteered as a docent at Bellamy Mansion for many years.

George is survived by his wife of 47 years, Joan Osborne Pidot, two sons, the Rev. Bruce Handy and wife Diana, of Marshville, North Carolina and Scott Handy and wife Dina of Walnut Creek, California.  He adored his grandchildren Felicia Handy Mancilla, husband, Ray and great-granddaughter, Anna, Julie Handy, Bianca Handy, Leah Handy, Lucas Handy, and Anjali  Handy.  He is survived by his two brothers Whit Pidot and wife Jeanne of Hobe Sound, Florida and Jeff Pidot and partner Jym St. Pierre of Brunswick, Maine and many beloved nieces and nephews.  He was predeceased by his parents and a sister, Diane Virginia Pidot.

The family is grateful for the care George received during his battle with congestive heart failure.  They would like to express their thanks to his primary care physician, Dr. Ian Foxell at Wilmington Internal Medicine for his many years of care, to George’s heart team, Dr. William Smith and Dr. John Rommel and the staff at Cape Fear Heart Associates, and to Lower Cape Fear Hospice, especially our primary nurse Shawn Johnson and home care aide Theresa Hicks for their devoted attention.

The family will receive friends at Wesley Memorial United Methodist Church from 10 to 11 AM on Thursday, December 5th with a memorial service following at 11 AM.