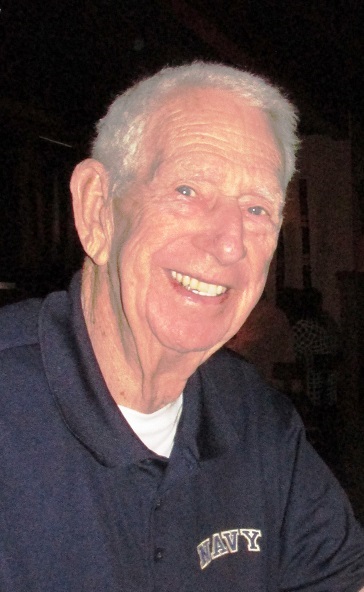 George Elwood Chaney, 95 – WWII veteran – died peacefully on January 4, 2018.  One of six children to George and Anna Chaney, George Elwood was born March 19, 1922, in Laurel, MD.  After surviving the Great Depression and his mother’s death, he was placed in foster care until his 16th birthday. The following 2 years he worked on a dairy farm in Howard County, MD, until December 8th, 1941 when he hitched a ride into town to enlist in the Navy.  He logged over 6,000 flight hours towing targets for the Atlantic Naval fleet. After an honorable discharge in 1946, he married the love of his life, Nellie Mae Owings of Elkridge, MD. They lived a good life in Baltimore, MD, raising four wonderful children and traveling the country. He enjoyed several years as an entrepreneur, followed by careers in the service industry until his retirement from Manheim Auto Auction in Dorsey, MD. After his wife’s death, he moved to Wilmington, NC in 2007 and enjoyed life on the golf course with his buddies Larry,  Hugh & Ed, shooting pool, Rummikub and tinkering. He is survived by his four children:  Patricia A. Shipley and husband Robert of Dallas, TX; James H. Chaney and wife, Lynda of Baltimore, MD; Christine Chaney Lyons and husband Beau of Wilmington, NC and John E. Chaney of Baltimore MD;  7  grandchildren; 16 great grandchildren and 3 great-great grandchildren.  He will be missed by many.

A visitation is planned on March 2nd from 7pm – 9pm at the home of Joe and Marie Vacek, 8128 Rose Haven Ave, Baltimore, MD. A memorial service will be held there also on Saturday, March 3rd from 2pm-3pm. Interment will be at Park Wood Cemetery at a later date.