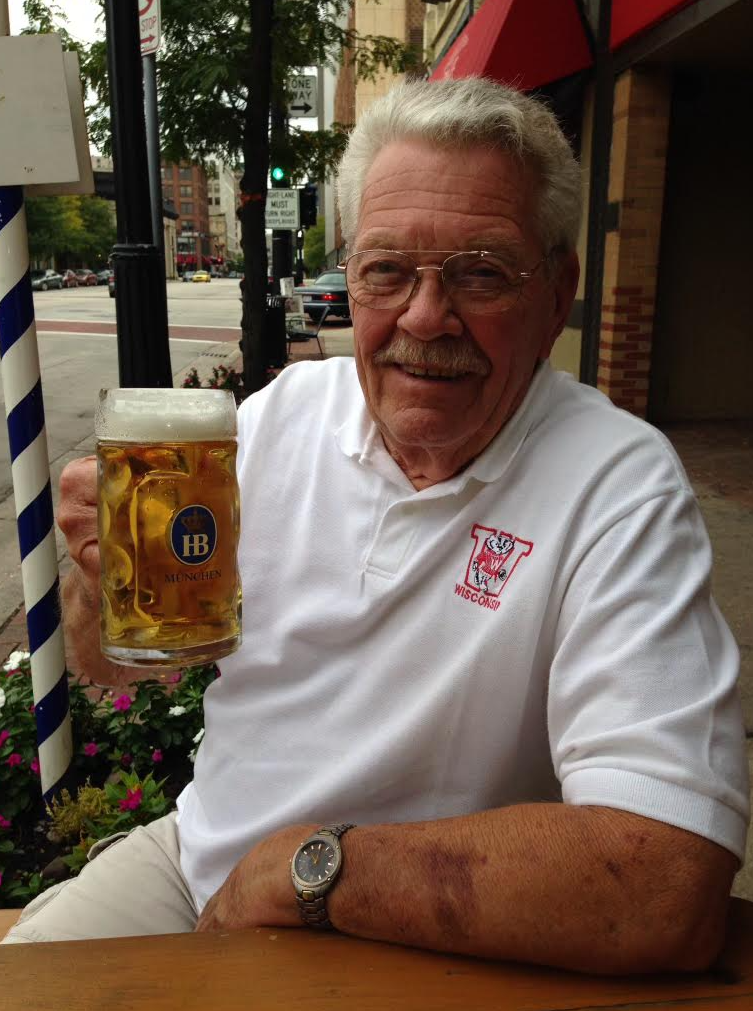 George Frederich Bartsch was born in Chicago, IL, to German immigrants George and Lydia Bartsch. Working in his parents’ tavern in Wittenberg, WI, George began a lifelong love of people, beer, and hard work. As a first-generation American, he embodied the American dream. In 1951, he graduated from Wittenberg High School, and later from the University of Wisconsin as a proud Badger with a Bachelor of Science in Geology and a minor in English.

George served our country and its people with honor and respect. He progressed from Advanced Air Force ROTC to Active Duty in January 1956. For 13 years in both the United States and Europe, George served full-time in the Air Force where he earned the rank of Lieutenant Colonel.  In 1969, he continued his military service with the Arkansas National Guard. As a fighter pilot, George flew the T-38, F-84, F-100, F-101 and F-4. While George was flying for the National Guard, he began his career as a commercial airline pilot where he flew Boeing 727s and 737s. Beginning his commercial career with Braniff Airways, George later retired as a Captain with Piedmont/US Airways in 1994. After his retirement, he had a two-year adventure flying as the First Officer on a lavishly decorated Boeing 727 for a sheik in Dubai, UAE.

One fall day in 1961 while in the Officer’s Club on Randolph Air Force Base in San Antonio, TX, George saw the most beautiful woman he had ever seen, his Martha Ann (Bobbie). In a beautiful love story, George and Bobbie were married six weeks later on December 27, 1961. They were married 55 years when Bobbie went to heaven. Together they raised four boys and countless, well-loved pets. George and Bobbie loved their boys unconditionally and passed down their love of God, country, family, and friends. George never fully recovered from losing the love of his life in 2017, but he carried on and continued to spread love and encouragement to his children, grandchildren, and all those blessed to be around him. His grandchildren brought him great joy and pride. He was a hard worker and passed down his work ethic to his sons. George was so dedicated to his family and their well-being, when the airlines were struggling he made ends meet working as a painter and janitor. Providing was not enough, he was dedicated to giving his family the best and willingly sacrificed during lean times for them.

Never without a good one-liner, George’s family and friends will forever remember his countless “George-isms.” These “George-isms” we’re especially enjoyed over a good glass of red wine or a Guinness and always created lots of laughs. To name just some of his favorites: “stick with me honey and you’ll be wearing potatoes big as diamonds,” and “my get up and go has gotten up and gone.” When you told him you missed him, he’d always respond, “your aim will get better.” As a nod to his Wisconsin roots, if you asked him a question, instead of a “yes,” George would give you a big grin and a hearty, “you betcha!” In his later years, he loved to provoke a good laugh as he said with a smirk, “if I would’ve known I was gonna live this long I would’ve taken better care of myself!” And last, but certainly not least, because he always loved everyone around him to have a good time, he would say, “you’re only on this big ball once!” He indeed had quite an “ausgezeichnet” (excellent) bounce on this big ball! Prost to you, George!