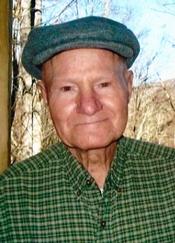 George Reaves, 85, of Wilmington passed away Saturday, February 4, 2012 at his home.

He was born on September 18, 1926 to the late Joe Reeves and Ernestine Carroll Reeves.

George was preceded in death by two brothers, Joe Reeves, Jr, Leland, and Herbert Reeves, Delco; one sister Peggy Young, Leland; and his loving and loyal companion of 18 years, his dog “Coco”.

George was a US Army veteran of WW II, and was assigned to the 925th AAA Air Wing Battalion at Leyte, Philippines from 1945-1946, his military awards include Asiatic-Pacific Theater Ribbon, Good Conduct, Meritorious Unit Award, and WW II Victory Medal. He retired from Babcock and Wilcox on March 1, 1983 after 30 years of service.

George began attending The Pentecostals of Wilmington Church in 1955 and has faithfully served for over 57 years in various roles including Sunday School teacher of the Junior High Boys Class, and in the church orchestra playing the Mandolin. He enjoyed pushing his grandchildren in his homemade wheelbarrow, fishing, hunting, and building various things such as a butter bean sheller, Benson gyro copter, go carts, and many other things. He loved cars, motorcycles, Dr. Pepper, and shrimp. Above all George was a loving husband, daddy, papa, and friend. A true Christian and family man who leaves behind a Godly legacy for his family and friends.

Funeral services will be 11 am Wednesday, February 8, 2012 at The Pentecostals of Wilmington Church, 3615 Chippeham Dr., Wilmington officiated by Pastor Floyd Morris, and assisted by Rev. Jonathon Feld. Burial will follow in Oleander Memorial Gardens.

The family will see friends from 6 to 8 pm Tuesday, at The Pentecostals of Wilmington Church.