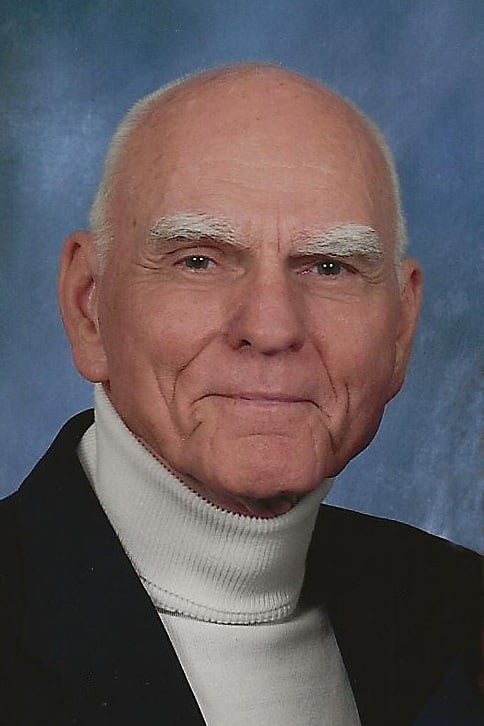 He was born in Huntington, West Virginia to John Chilton Honaker and Ica May Branch Honaker on September 5, 1925. He was predeceased by his wife of 63 years, Thaise (Teddy) Honaker, in 2016. He is survived by two brothers, John Honaker and wife Diane, and Carl Honaker and wife Claire, son Geoffrey Honaker, his wife Deborah Covington and granddaughter Hope, and daughter Leslie Honaker Bolsover, her husband Stephen and grandchildren Gillian and Alex.

Jerry grew up in Huntington, graduated high school and enlisted in the Air Force in 1943. He was a tail gunner with the 451st Bombardment Group flying out of North Africa and Italy. His plane was shot down twice and he was awarded the Purple Heart for his injuries. The second time he was shot down resulted in capture by the Germans and he remained in captivity until liberated in 1945.

Upon his return to the US, he attended Rollins College where he received a BA in Theater Arts in 1949. In 1951 Jerry received a MA in English and Drama from the University of North Carolina at Chapel Hill and that summer was a cast member in the outdoor drama “Unto These Hills” in Cherokee NC. There he met the love of his life, Thaise Ruth Bedford and after a brief courtship they were married on October 15, 1951.

In 1956 he joined the faculty at Eastern Kentucky State University in Richmond KY and then in 1960 moved to Bloomington IN and became a teaching assistant at Indiana University while working on his PhD. In 1964 Jerry became the Chair of the Drama & Speech Department at Catawba College in Salisbury NC. He received his PhD in Speech and Theatre Arts from Indiana University in 1969.

During their time in Salisbury, he and Teddy were very active in the local arts community. Jerry directed plays for Catawba as well as the local community theater and Teddy directed the Choral Society and was music director for local theater productions. While in Salisbury they also organized and led several tours of Europe and had many extended visits with Leslie, at her home in England, watching Gillian and Alex grow up. After Gerry’s retirement from Catawba College, they moved to Wilmington and spent 25 years at their home in Pine Valley.

During their time in Wilmington they continued to travel the world, made great friends and enjoyed their grandchildren. Jerry worked at Coastal Photo, Kenan Auditorium and directed several plays for the University of North Carolina Wilmington. He also participated in the local theater community and enjoyed windsurfing well into his 70s.

In his later years he spent time writing his autobiography “One Lucky Life” which has been read and enjoyed by many of his friends and family. Additionally, he was a popular speaker at local meetings recounting his experiences during World War II and prison camp.

The family would like to thank the providers and staff at Trinity Grove for their loving support of Jerry during his time there.

The family intends a private ceremony at his interment. In lieu of flowers memorial contributions may be given to a charity of your choice.