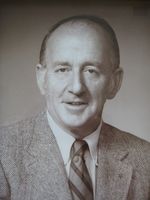 He was raised in Boston, Massachusetts, and graduated from William Jewell College, Liberty, Missouri, with a degree in Foreign Languages. He spent most of his career in international business with Ralston Purina of St. Louis, Missouri and Central Soya of Fort Wayne, Indiana. During his career, he traveled the world, and he and his family lived in St. Louis, Minneapolis, Venezuela, Miami, Memphis, Puerto Rico and Fort Wayne, Indiana. He and his wife spent the past six years in Wilmington, North Carolina. In his retirement, he also owned a cross-stitch store, drove a school bus, and worked as a Security Guard.

He was known for his undying love of the Boston Red Sox, his humor, and his love for his family and friends. His family would like to express appreciation for the care he received from his doctors, and the New Hanover ICU staff.

Donations may be made in his memory to the American Lung Association, 61 Broadway, New York City, NY 10006. Donate “here”
www.lungusa.org

A private memorial service will be held to celebrate his life.

Condolences may be sent to www.wilmingtonburialandcremation.com