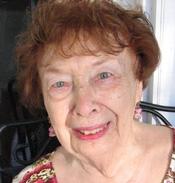 Ms. Moffitt graduated from Central High School with the class of 1934B, the Cambridge Massachusetts School of Nursing in 1938. She later received a BS cum laude in psychology from New England College in Henniker, NH. Her interest in diseases of the eye led her to study cryogenic eye surgery at Baylor University Medical Center, Dallas, Texas. She subsequently worked as an RN in that field at the Massachusetts Eye & Ear Infirmary in Boston as well as the Massachusetts General Hospital and Tufts Medical Center. The last 20 years of her career she was a nurse with the VA Hospital in Manchester. Ms. Moffitt also served at Walter Reed Army Medical Center caring for the wounded during World War II.

Upon her retirement in 1993, she enjoyed traveling with her daughter and son-in-law who worked for the US Government. She lived in Syria, Jordan, and Israel and traveled widely throughout Europe and the Middle East.

Gladys was an avid reader and a lover of music. An accomplished pianist, while still in high school, she played afternoon concerts on Manchester’s classical radio station. She also enjoyed sewing and knitting. She loved animals, especially cats and dogs, and had many animal companions over the years.

She is survived by her daughter and son-in-law Regina Ventre and Andrew Tichava of Wilmington, NC, her loving caregivers and with whom she made her home; daughters, Barbara Beach(Donald) of Medina, Ohio, Janet Miller (Joseph) of Germantown, OH; son, Mark Tracy (Lin) of Ocala, FL, grandchildren, David (Terri) Hinchee of Beaver Creek, OH, Mark (Becky) Hinchee of Miamisburg, OH, Eric (Lauri) Beach of Sidney, NE, Heather Beach of Grapevine, TX and Louise Tracy of Reno, NV, as well as three great-grandchildren. She was preceded in death by her parents, Charles and Camilla Moffitt. Interment was private in Pine Grove Cemetery, Manchester, NH.