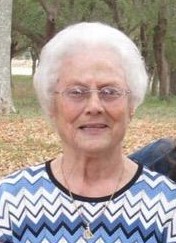 Gladys Jones Outlaw, 91, of the Middle Sound Community went peacefully to be with her Lord on Friday July 24, 2020, surrounded by her loving family.

She was born on February 28th, 1929 in Portsmouth, Virginia to the late Johnnie Robert Jones and Emma Jane Bradshaw Jones.

She married the love of her life James Wilfred Outlaw on October 3, 1952 in Drivers, Virginia.
They moved to the Wilmington area in 1955 and settled in the Middle Sound Community to start their family.

Their home soon became a place where families and church friends would often come to fellowship. Children would swim and play in Pages Creek, and many lasting relationships and memories were formed during these times.

Gladys served as the Secretary of Ogden Baptist Church during the early years when the church was formed. She was actively involved in all aspects of the church, particularly in teaching Sunday school and hosting bible studies where she could share God’s love with others. Gladys’ love for Jesus still resonates with those whom she has touched.

Her time at work started at the downtown Wilmington Hilton in the banquet department with many dear friends at her side. She also worked at Ryan’s Steakhouse in Wilmington for several years. Her final work was in the cafeteria at Ogden Elementary School during the precious time her Granddaughter Hannah was attending school.

Gladys and her daughter Myra shared a special relationship. They would hardly ever be seen without each other. Their favorite saying was “we will be home in a little bit” which usually meant a few hours.

Gladys loved her Grandchildren and cherished the time with them in all their activities. She was so proud of all their accomplishments and their growth as adults.

Funeral and visitation will be at Wilmington Funeral & Cremation, 1535 S. 41st Street, Wilmington NC on Thursday July 30th from 1:00-2:00pm. The service will follow the visitation at 2:00pm, followed by her burial at 3:00pm which will be located at Greenlawn Memorial Park 1311 Shipyard Blvd, Wilmington, NC 28412.