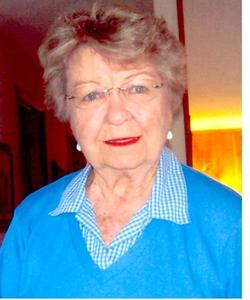 Glenn Hufham Petersen, age 84, of Wilmington passed away Thursday, April 10, 2014 at her home. She was born in Wilmington, North Carolina the daughter of the late Gurney and Flossie Hufham.

After graduating from New Hanover High School in 1948 she completed a one year commercial course at Women’s College in Greensboro, North Carolina with honors and worked in the offices of Southern Bell.

Glenn then married Don Petersen her high school sweetheart in 1951 at Grace United Methodist Church. They raised three boys, James F. Petersen, Jeffrey J. Petersen and D. Steven Petersen. Don was in the Army, so Glenn frequently had to take care of everything at home while Don was sent elsewhere. She did an outstanding job at this and as a military wife. In 2007 she lost her son, Steve Petersen to MS. Jim and Jeff married wonderful and talented women.

Jim and Penny have four boys and Jeff and Dian have a son and daughter. Glenn also leaves a sister Aline Reis Hartis; a brother, Jack Hufham and their families.