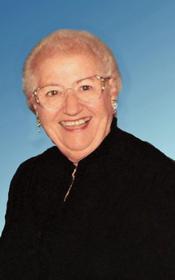 This obituary is for Grace Diodati Vigneri written by her two sons, Ronald & Richard. A book could be written about her full, 98-years of life. Born in Montelsilvano, Italy in 1913 and died October 22, 2011. She came to America with her mother, two sisters, and one brother in 1921 on a sailing ship over a 21-day passage. Her toy in passage was a brick she dressed as a doll that was kept for years. They first resided in New York City and all achieved remarkable success in business and family. She married Salvatore Vigneri in 1940 and they were together until Sal passed away in 2009. They moved to Wilmington in 1992 and loved the area after living in Ridgewood and Wanaque NJ since 1946. Grace retired as a Lead Seamstress for Lord & Taylor after many years and sewed her last outfits just the past few months, particularly a beautiful dress for her great granddaughter (the first girl in the family in 75 years). Grace amassed a large collection of dolls and other objects that reflected from her sparse childhood possessions.
She was mentally sharp as a tack right to the end and conquered many medical conditions that would have stopped a lesser force. She would not yield, and we all admired her for the attitude and strong will. Grace took care of Sal for many years besides caring for herself. Family and doctors helped, but most efforts to persevere were hers. Her advice and counsel was sought out by many family members, she had an opinion on everything, and always advocated “to do the right thing”.
Like the song, she never sat it out, she danced, literally, and in life. With husband, Sal, she loved ballroom dancing and, particularly, won many a two-step dance competition. They loved the music of their time, and Grace would have tears anytime her son played “Autumn Leaves” for her on guitar, the first time when he was 12 on an accordion. She had just spoken about this being “her Autumn season” prior to entering an assisted care facility earlier this month.
She never lost a friendship and always gave more than she received. Grace was our large family’s best cook over many decades. She hosted and provided all for many parties yearly for decades for large gatherings of family and friends. Her braciole and lasagna pasta dishes along with lemon meringue pie were unbelievable. Miss Grace never missed quickly asking family or friend to have something to eat, and something good was usually cooking in her kitchen. A point of pride was never missing the sending of a gift for a birthday, anniversary or special occasion.
Her penmanship was perfect to the end and always remarked about. She strongly advocated education, particularly, self-help efforts. Having left school to go to work after 8th grade, she educated herself continuously through the rest of her life. An avid reader, she spent many hours reading and teaching reading to her children and grandchildren.
In life, she was as tough as nails with a heart of gold. She would attain her goals by shear willpower and effort, and never yielded her spirit right to the end. She lived alone since Sal died and did her own cooking, shopping, and housekeeping. Her daughter-in-laws, Joanne and Gisela, were of tremendous help and support through the years here in Wilmington along with her sons and grandsons, Ronald Jr, Roy, Russ, Todd, Daniel, Wayne, Mark and Curt with their respective families, both near and far. Many other relatives provided care and support from a distance. Two sister-in-laws, Tena and Sally, in Staten Island NY are the only family members of her generation remaining.
The names of all other relatives are known in the family and are not presented here. The family appreciates all the caregivers over many years including particularly: Dr. D. Mottola; Dr. M. Rudyk; Dr. Fischer; Dr. McGarrity; Dr. Gajewski; Well Care Home Health; Winter Park Pharmacy; Cyprus Point and Liberty Commons.
A family memorial service is to be scheduled. In lieu of flowers, memorial contributions can be made to one’s charity of choice. Condolences can be posted at wilmingtoncares.com.