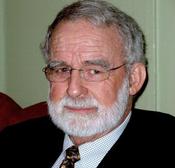 Grady Kenneth Day, 76, died of melanoma cancer on Sunday, March 6, 2011 at his home in Wilmington.

He was born on October 16, 1934 in Burke County, the son of the late Thomas Hamilton and Lilla Mae McNeely Day. He was also preceded in death by an infant sister Gaynell, his older brother, Brevard Hamilton Day, his older sister Caroleen Rector, and his younger brother, Garva Day.

He is survived by his wife, Susan Patman Day, sisters, Willadean Rector of Drexell, Reba Huffman, of Birmingham, Kathleen Hoyle of Hickory, his brother, Troy Larkin Day of Kannapolis, sister-in-law, Betty Day of Morganton and numerous nieces and nephews.

Grady graduated from Valdese High School and Lenoir-Rhyne University, served in the National Guard a number of years and was an independent KFC franchisee for over 40 successful years. After retirement, Grady had many adventures owning an Ostrich farm in Colorado, and later a Llama farm in New Mexico. After moving to Hilton Head in the 90’s he continued his serious pursuit of the challenging game of tennis and upon moving to the Wilmington area continued the sport while making loyal friends with whom he shared many wonderful times. His family is most grateful for the cares and concerns of all. He will be gravely missed.

A memorial service will be held at First Baptist Church on Friday, March 11, 2011 at 1:30 PM. The family will receive guests in the Church parlor following the service.

If desired, in lieu of flowers a remembrance to Lower Cape Fear Hospice, 1414 Physician Drive Wilmington, NC 28401 would be most appreciated.