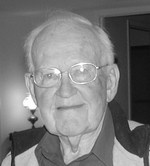 Born near Boston, Mass. on February 16, 1917, he graduated from Northeastern University with a degree in Civil Engineering in 1939. In 1942, he married Audrey Louise James of Malden, Mass., and in 1943, Grant joined the US Navy, where he served in the Pacific in the Seabees during World War II. After the war, he returned to work only shortly before being transferred to Savannah, Georgia in 1946. Two years later, his only child, Richard, was born. After several moves, the Joslins settled in Greensboro, NC, where they lived from 1954 through 1996, when they moved to Wilmington.

He is survived by his wife, Audrey James Joslin, his son Richard Grant Joslin and wife Anne Walker Joslin, a sister Elizabeth Joslin Smith and brother Loren Joslin, both in the Boston area, Charles James, a nephew who lives in Salisbury, grand-nephew Brian James and wife Wendy Powers James and their sons Benjamin and Noah, all in Wilmington, and Beth James Norris, a grand-niece in High Point.

A graveside service is planned for Monday in Greensboro at Westminster Gardens.