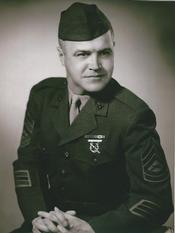 He was born on September 29, 1932 in Riga, Latvia, the son of the late Ansis Gustavs Apsitis and Elvira Ozolins Apsitis. He was preceded in death by his wife of 57 years, Nena Miles Apsitis, and his sister, Rasma Daila Apsitis.

Gus immigrated to the United States on August 23, 1949 as a 16 year old. Upon high school graduation, he enlisted in the United States Marine Corps. On November 10, 1953, he became a legal naturalized Citizen of The United States of America. He proudly served our country in the Marine Corps for 23 years. He obtained the highest enlistment rank of Master Gunnery Sergeant and was respectfully and admirably known as “Top” for many years. He served home and abroad with overseas duties in Vietnam, Japan and Australia. Some of his many responsibilities included recruiter, war correspondent, defense journalist and public relations instructor. He retired from the marines in 1975 and began a four year position with the North Carolina Department of Transportation as a public relations manager.

In 1979, Gus returned to federal employment as an editor and logistics officer for the Defense Department in Lexington, KY. In 1994, Nena and he retired and relocated to Wilmington, NC. During his retirement years, he had a small business to aid non-profit organizations. He also completed extensive genealogy work and research, which included a trip to Latvia. Gus enjoyed many activities at VFW Post #2573 and American Legion Post #10. Card games, gardening, grand parenting, Duke Basketball, reading, writing, and computer activities filled his days.

The Apsitis Family would like to extend a heartfelt “Thank You” to the entire staff at Liberty Commons Skilled Nursing Facility, and our deepest gratitude goes to the caring and compassionate caregivers at the Lower Cape Fear Hospice. We request memorials to be directed in his memory to their excellent facility at 1414 Physicians Drive, Wilmington, NC 28401 or to the VFW, American Legion, or the charity of your choice.

A private final sevice is planned for a later date.