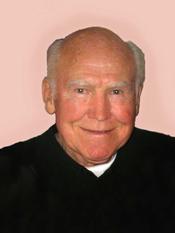 Alfred was born September 17, 1917 in Norway, Maine to father Orey Wiles of Nova Scotia and mother Louise Marie Schenk Wiles of Norway, ME.

March 1941 Alfred wed Montress Scribner of Minot, ME. They were married 42 years.

Alfred completed training as a machinist at Wentworth Academy of Boston, MA in 1938. He worked at Hamilton Standard / United Aircraft in Hartford, CT machining parts for the hydromatic propeller fitted on the B-29 among other aircrafts. From 1943-45, Alfred worked at Todd-Bath Shipyard in South Portland, ME machining drive shafts for the WWII Liberty Ships.

Alfred was most known for starting Wiles Garage and Body Shop in Norway, ME in 1947. Alfred’s son, Steve, continued the business and later Steve’s son, Kevin, followed this legacy.

An avid outdoorsman, Alfred enjoyed hiking, trips to Allegash, Alaska, hunting and fishing. He was a Scout leader for eight years in Norway, ME making a significant impact on his troop members.

Alfred resided in Wilmington with his daughter, Laurie, for several winters and permanently since 2009. He attended Pine Valley Methodist Church, and enjoyed golf, fishing and sinking his feet in the sand.

He is preceded in death by his wife Montress W. Scribner, his brothers James Francis Wiles, Herbert Wiles, and sister Dorothy Ellison.

Memorial services and celebration of Alfred’s life will be held at Pine Valley Methodist Church (3788 Shipyard Blvd, Wilmington, NC) at 11:00 AM on Saturday, January 7, 2012.

In lieu of flowers, we are asking that donations be made to Lower Cape Fear Hospice, 1406 Physicians Drive, Wilmington, NC 28401.