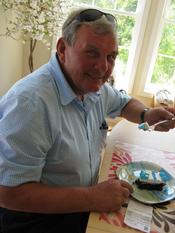 Hans Lund, 70, Wilmington, NC passed away on Wednesday May 18, 2011 from complications of lung cancer.

Lund was born in Örebro, Sweden in 1941 to Majlis Hagberg and Hilding Hansson. Lund grew up in Skåne, Sweden, living both in Borby and Skillinge. At 16 he moved to Malmo, Sweden where he met Inge-Lise whom he married in 1962. Lund later married Barbra Von Philip in the United States. She preceded him in death.

Lund was a master craftsman whose work in the concrete industry took him all over the world. He was exceedingly proud of the time he spent working on the Storebelt Bridge in Denmark which was the longest main span bridge in the world at that time. He was similarly proud of the work he did in the U.S. including his restoration work on the North Carolina State Capitol Building and other historic restoration projects.

When he was not working or boating, Lund could often be found in the kitchen cooking for friends. He and Inge-Lise owned and operated several restaurants early in their marriage. While working in the United States, Lund also frequently cooked for the Wilmington Swedish Club and for anyone who visited him at his home.

Lund was a charismatic and loving individual who loved good company and who had a gift for making friends wherever he traveled. Among his many passions were his family, traveling, sailing, cooking, construction, and photography. Lund loved taking and sharing his photographs, especially of his children and grandchildren. Where most people would take two photographs, Lund would often take twenty, and share them freely.