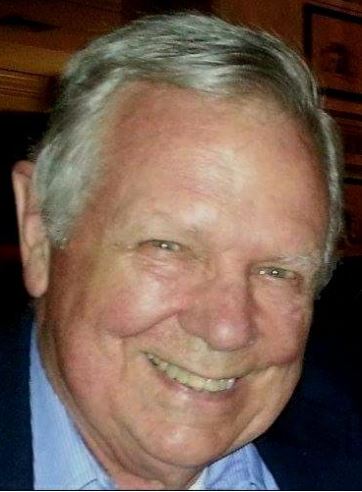 Harry Morgan Ayres Hart, age 84, passed away at his home in Wilmington, NC
on June 14, 2018 . Gone from our sight, but he will always live on in the hearts
and minds of family and friends.

Harry was born in NYC on September 8, 1933, the son of Donald Buell Hart and
Ann Ayres Hart Herrick.

Harry is survived by his loving wife Patricia of 35 years, his brother The Rt. Rev.
Donald P. Hart and spouse Elizabeth, his son Seth Rahn Hart and spouse Eileen,
his daughter Carolyn Ayres Hart and partner Dr. John Brooklyn, his daughter
Amy Wentworth Hart Adams and spouse Douglas, his stepson Brad Marcus
Bear who was by his side helping his Mom care for Harry for many years, his
sister-in-law Kathleen Santino, predeceased by his brother-in law, Thomas
Santino and survived by his sister-in-law, Bonnie Santino Lutz. Harry is
predeceased by his former spouse, Marie Rahn Johnson.

Harry has 9 grandchildren, all of whom have excelled in many fields. The
eldest, Torey Hart, is in The Peace Corps in Malawi, Africa.

After graduating from Columbia University, NYC in Mathematics and Physics,
Harry worked as an Engineer at Lockheed in California. His concern about the
inhumanity of nuclear war led him back to New England and into the world of
education. He received his Master’s Degree from The University of New
Hampshire and then studied Philosophy at Harvard University. Harry was
Assistant Headmaster at several private schools and he found his experience at
The Southborough School in Massachusetts to be one of the most meaningful for
him. While teaching Mathematics and Eastern Philosophy, his most rewarding
experience was counseling his students, bringing direction and meaning to their
lives. Eastern Philosophy, particularly Zen Buddhism, was an enrichment to
both he and Patricia. Harry then went on to become Headmaster of Chapel Hill-
Chauncy Hall School in Waltham, MA and Assistant Headmaster and teacher at
The Beaver Country Day School in Chestnut Hill, MA.

Harry was an avid Sportsman and was extremely proud of his children and
grandchildren who excelled in many sports. Harry taught his children to sail at a
very young age. He was Director of The Wianno Yacht Club on Cape Cod,
directing sail boat races. Harry and Patricia were asked to Direct The
Hyannisport Beach Club on Cape Cod, but chose to continue their work as
Assistant Headmaster and Nurse Practitioner. He did mountain climbing with
his brother Don. Climbing every one of the Presidential Mountains in New
Hampshire, he taught his students to build and to sleep in snow caves. Harry was
Captain of Crew and several of his family rowed crew including his daughter
Amy, Carolyn’s sons, Fisher and Baxter, and now his youngest grandchild Sam,
son of Amy and Douglas. Harry began woodworking at age 8, building 3 homes,
the first on Cape Cod in Truro. He also built 2 boats and all his furniture. His
son, Seth has also become a Woodworker.

Harry and Patricia lived aboard their boat for 3 years, exploring the coast and the
Islands of New England, including Nantucket and Martha’s Vineyard. They
traveled from Boston to Wilmington, NC by boat in 1995.

A Celebration of Life will be held at St. Andrews On-The-Sound Episcopal
Church, 101 Airlie Road in Wilmington at 11 am on Saturday, July 7. Harry’s
brother, Bishop Donald P. Hart and The Reverend Richard Elliott will honor
Harry’s life.

In gratitude for their care and support during Harry’s decline due to Progressive
Supranuclear Palsy, the family would appreciate donations made to The Lower
Cape Fear Hospice, 1414 Physicians Drive, Wilmington, NC, 28401.