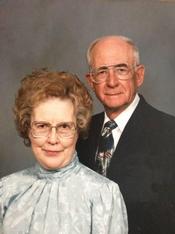 Harry’s military career began when he enlisted in the Army on Dec. 11, 1942. He served in the Army Air Corp in England from June 1943 to Oct. 1945. He retired from the Air Force as a Major after 20 years of service and then retired after 18 years of civil service with the Air Force Accounting & Finance Center in Denver, CO. Harry and Marilyn were married Nov. 26, 1949. They lived in Oklahoma City, Germany, Pittsburgh, Colo. Springs and Denver. They were members of Augustana Lutheran Church in Denver for 40 years. They moved to Wilmington, NC in 2004 to live with their daughter.

The Wise family will be receiving friends from 6-8 p.m. Monday, May 20th at Wilmington Funeral Chapel. Harry and Marilyn Wise will be buried at Arlington National Cemetery.

They were preceded in death by their parents, Harry’s brother Philip Wise, and their son Timothy Wise. They are survived by Harry’s sister Margie Byrd, daughter Pam Post and husband Jason, son Robin Wise and wife Elaine, Timothy’s wife Ann, grandchildren Lori Wise, Elizabeth Wise, Melissa Bennett and husband Sean, Jonathan Cabral, Sean Wise and wife Erin, Sara Wise, Nathaniel Post and wife Cassilyn, Noah Post and wife Rachel, as well as 11 great- grandchildren. Their love of life and devotion to family will be greatly missed by those who were touched by them.

In lieu of flowers, memorial contributions may be made to the American Lung Association, 4006 Oleander Drive, Wilmington, NC 28403.