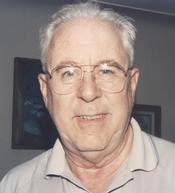 Henry Francis Crider, Sr., went to be with his Lord and Savior on October 12, 2012, after a long battle with Alzheimer’s disease. Son of David and Bessie Hickman Crider, he was born on August 29, 1923, in Detroit, Mi.

During World War II, Henry served in the Army Military Police as a medic and ham radio operator in North African and India campaigns and while there, he entertained troops with his piano skills. When he returned home he studied Pharmacy at Wayne State University in Detroit and received his degree in Pharmacy, worked for 30 years as Chief of Pharmacy at Hutzel Hospital, Detroit, MI. He was a virtuoso pianist and organist who attended Detroit Conservatory of Music and played the organ at Simpson Methodist Church for 30 years. He loved Ham radio and was assigned the call letters W8FWX which will now be off the air forever-73.

Henry Crider was an honorable man who loved the Lord, his family, country, profession, music, radio, and his dogs. Other survivors include six grandchildren and two great-grandchildren (and one on the way). A dearly loved dad, he told the corniest jokes-laughed hardest at himself and left a long list of his sayings, “Dad-isms,” which will remain sweet treasures of a true family man. He appreciated, and his family gives special thanks to, one of his gentle caretakers and sister-in-law, Alice I. Herring Hughes Brantner of Cherokee, NC. Henry requested immediate cremation and requested a quiet memorial with his ashes being buried beside his wife in a small cemetery in Whittier, N.C., which was his quiet style.

In lieu of flowers, the family would appreciate donations to a local Alzheimer’s agency or Liberty Hospice who took such wonderful care of him throughout the last nine and half months of his illness. Liberty Hospice, P.O. Box 200, Supply, N.C. 28462