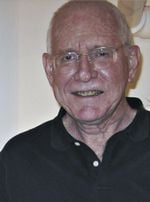 Judge Stitt, a well-known figure in legal circles, served as the county attorney for nearly a dozen years, as president of the Fairfax Bar Association for a year in the 1980s and as a Circuit Court judge for almost 13 years.

He was also known as a dedicated outdoorsman, enjoying hiking, boating, playing tennis or commandeering players for a bar association volleyball tournament. His son recently qualified for the U.S. Olympic rowing team, and Judge Stitt had been hoping to travel to Beijing this summer.

“He was an individual without pretense, without arrogance, and he saw things clearly, and he spoke clearly and directly,” said former law partner William D. Dolan III. “You may not like what you were hearing, but you didn’t have to search for nuance. He really had a low tolerance for bull.”

Judge Stitt would sit on the bench for long stretches, his chin in his hand, saying nothing while witnesses testified or attorneys argued. But when someone raised an objection or asked for help, Judge Stitt was quickly responsive with rulings that wasted no time or words in getting to the point.

He also didn’t hesitate to take unpopular or unorthodox stands. In 2005, he heard the paternity case of Andre Chreky, a Washington celebrity hairstylist, who had been found by DNA testing to be the father of a teenage boy. After listening to days of sometimes tedious testimony about the DNA testing process, Judge Stitt threw out the test results, ruled Chreky was not the boy’s father and criticized the testing company.

“I thought LabCorp’s performance was shoddy,” Judge Stitt said then of the testing company. “I think something unfair happened in this case, where a citizen was put to the greatest extent to defend himself against what really has turned out to be a moving target as far as where LabCorp is concerned.”

In 1998, after a man driving with a blood-alcohol level of 0.15, or nearly twice the legal limit, crashed into a car near Vienna and killed a 4-year-old boy, Judge Stitt dismissed the man’s drunken-driving case because prosecutors failed to properly present the toxicology results.

Prosecutors asked Judge Stitt to postpone the case, the man’s attorney, Mark J. Yeager, recalled, but the judge refused. If he postponed the case, Judge Stitt said, “I’m afraid I will be considered an arm of the commonwealth’s attorney, and that’s something I don’t wish to be.”

Yeager said, “It always takes guts to make the right decision, knowing that the media is going to blare it all over the place. But he made the decision that had to be made.”

But Judge Stitt was no pushover. On May 2, he imposed two life sentences on a street gang member who had committed a murder in Reston in 2001. And in 2006, he sentenced an Alexandria area man to 30 years for murder even though state sentencing guidelines recommended a maximum of 29 years.

“He did a wonderful job on the bench and handled the cases well,” said Chief Fairfax Circuit Court Judge Dennis J. Smith, who joined the bench a month before Judge Stitt did in 1995. “He was somebody who was very straightforward but with a great sense of humor.”

David Tillman Stitt was born in St. Louis and, when he was 2, moved to Austin, where he was raised. He graduated from Davidson College in North Carolina, where he played freshman basketball for then-coach Lefty Driesell. Longtime friend Gerard Treanor said Driesell instantly recognized his former player at a reception many years later.

Judge Stitt entered the Army and served as a Ranger during the Vietnam War, friends said. He received his law degree from the University of Texas in 1969 and moved to Washington, where he worked first in the corporation counsel’s office, then as an assistant U.S. attorney. He became an assistant county attorney in Fairfax in 1975, was appointed county attorney in 1980 and left that job for private practice in 1991.

Judge Stitt was a regular at state and local bar association functions, organizing so many volleyball tournaments that the local bar’s volleyball trophy is named for him. He also spoke regularly to law school classes about the need for civility and professionalism in the courtroom, Treanor said.

“He always treated me and my clients with dignity,” lawyer David Bernhard said. “And more importantly, he had the sometimes-absent quality in judges that he never prejudged a case but made up his mind after all litigants had their say.”

Survivors include his wife, Elizabeth Stitt of McLean; and two children, Samuel T. Stitt of Princeton, N.J., and Rachel Elmendorf of Washington.