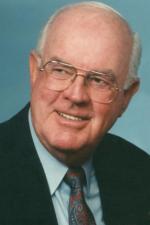 Jim served in the U.S. Navy in 1944. He owned the Corner Store Luncheonette in
Irvington, New York. He had a career in sales for County Asphalt of Nyack, New York
for over 30 years.
He retired to Wilmington in 1987 and enjoyed golfing at The Cape, family gatherings and
his daily visits to Port City Java. Jim’s pride was in his family and he wanted the best for
his children and grandchildren.

Funeral services will be held at a later date in Tarrytown, New York at Sleepy Hollow
Cemetery.