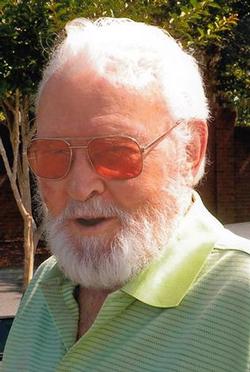 Dick graduated from Goldsboro High school in 1933 and after traveling for two years, attended NC State College, (NC State University). His tuition and other expenses were paid by washing dishes in the dining hall and raking leaves on the campus grounds for ten cents an hour. Dick graduated in 1939 with a BS Degree in Agronomy. He was a Life Member of the NCSU Alumni Association and was inducted into the honorary Agricultural Alpha Zeta Fraternity.

After graduating from NC State, Dick was employed by the NC Agricultural Extension Service as an Assistant County Agent in Caswell County and later in Wake County. After meeting Mr. A. E. Finley in October 1942 and being captivated by his dynamic and persuasive personality, went to work for Mr. Finley on January 1, 1943 as a salesman with NC Equipment Company and later became Senior Vice-President. His relationship with NC Equipment Company continued through 2001 at which time the Company (flagship of the Finley Empire) liquidated and Dick retired at age 85 after more than 50 years in equipment sales.

The State of NC had its share of road builders that worked nationwide as well as worldwide and Thompson followed them wherever they went. He was considered by many to be the consummate salesman and still others referred to him as the quintessential salesman. He loved selling and never met a stranger. His customers became his friends. He was never intimated by the depth of the carpet in an office or their hangings on the wall. When the phone rings for Thompson it might be friends anywhere in America or another country.

The equipment business and construction activities took most of Thompson’s time, however, he had time for beef cattle enterprises in NC, FL, TX, NM and CO. He owned a cattle ranch in Trinidad, Colorado which he sold in 1977. He was a charter member of the National Cattlemen’s Beef Association, the NC Cattlemen’s Association and the Texas Cattle Feeders Association.

While living in the Leland area he had several interests in the Raleigh area…one of which was a unique connection with Yates Mill Associates in the restoration of the more than 256 year old grist mill that he helped restore and is in operation at 4620 Lake Wheeler Road. This historic jewel is non-profit, opened to the public and the sale of the corn meal to visitors keeps the wheel turning. Thompson was a member of the Board of Directors and loved volunteering and telling school children and other visitors the story of this historic mill which has attracted locals as well as visitors from many countries.

Dick was a member of the Good Ole’ Boys Club in Raleigh that meets once a month at the Carolina Country Club; The State Club on Centennial Campus; and on the Steering Committee of The Forever Club, a NC State Alumni related activity.

Dick enjoyed the luncheon meetings once a month with the men in his Brook Crossing Neighborhood of Waterford and many other occasions with neighbors throughout the years.

The family extends thanks to the dedicated Doctors , Pasquariello, Credle, Watson, Brezinski and the Pulmonary Program where he was enrolled and spent many hours enjoying fellowship with staff and friends.

Dick formed a special bond with, John, Dale, Dr. Pierce and Big John and enjoyed their many road trips and adventures. Also among his treasured friends are Sandra and husband Kevin.
Dick was a Christian and his greatest desire was for his children, grandchildren, all relatives and friends to know Christ as Savior and spend eternity in heaven with him.

A Celebration of Life memorial ceremony will be held 2 PM Monday, June 9, 2014 at Wilmington Funeral Chapel.