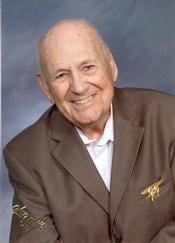 He was preceded in death by his wife, Dorothy E. Sandy.

He and Dorothy enjoyed 27 years of traveling by motor home and traveled in Mexico, Canada and all states except Hawaii because Dorothy said there wasn’t a bridge to get there.

He was a member of the Winter Park Baptist Church, and previously served as a deacon for a number of years starting in 1985 at the Harbor City Baptist Church in Melborne FL.

JD had the distinction of serving as a Frogman in WWII and was in the first NAVY UDT graduating class; which is the predecessor to the Navy Seals. He served in 12 invasion campaigns during the war. He retired from the Metropolitan Police Department in 1966 after 22 years of service.

He was Secretary Provost and served as Captain of the Motor Corps in the Almos Shrine Temple in Washington DC. After moving back to Wilmington in 1969, he remained active in the Shriners Drum and Bugle Corps, Sudan Temple, Wilmington and served as president of the Channel Haven Citizens Assn.. Over the years, he was also active in and held positions in the B.P.O. Elks and the American Legion in Wilmington.

Memorial services will be held 11 AM Saturday May 21, 2011 at Winter Park Baptist Church.

Memorial contributions may be made to the Shriners Burn Centers, 3229 Burnett Ave. Cincinnatti, Ohio 45229.