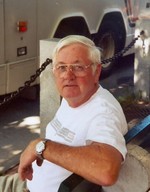 Following his Father and Paternal Grandfather he became a Locomotive Engineer retiring from CSX Transportation in June 2002 after 36 years of service. He enjoyed his retirement years playing golf and traveling.
On May 6, 1974 he accepted Jesus as his Savior. Never met a stranger, made friends everywhere he went, often sharing his time, home, energy, money, and talents as “a jack of all trades“ to those in need. He tried to appear tough, but had a very loving, giving heart. He will be greatly missed by all who knew him.

A Memorial Service will be held at 11:00 a.m. on Thursday, June 18, at the Wrightsboro United Methodist Church with pastors Bill Haddock, John Bordeaux and Rick Crocker officiating.

In lieu of flowers please donate to the American Cancer Society.