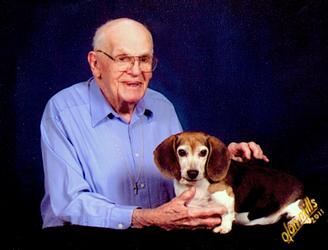 Jim, 98, passed away at Trinity Grove Lutheran Home on Sunday November 16, 2014. He finished the race that was marked out for him and now is reunited with his parents, wife, sisters and brother and many dear friends who passed from this life before him. When great men die, the temptation is to lift up the greatness of the man. Truly great men, like Jim, know that the only greatness is found in Christ and in humble service to the Lord. It has been said that all heroes are a shadow of Christ. We have lost our hero, but we rest in the full knowledge that he is in the eternal presence of the One whom he lived for. All will die, but tragically many die having wasted their life to some extent. Jim’s life was anything but wasted! His life, experiences and relationships were so vast only a library of novels could hold all the stories. Anyone that knew him was impacted by his love for them and God. We will surely mourn his passing because we will miss him dearly but we know there is a truth that is greater than any sadness we can feel…

“Now if we died with Christ, we believe that we will also live with him.” Romans 6:8.

He volunteered for service in WWII and was assigned to the 291st Engr. Bn. serving in Gen. Patton’s 3rd Army. Jim was awarded the Bronze Star for meritorious service . May, 2010 he was privileged to be part of the Honor Flight for WW11 veterans to Washington, DC. Jim worked as a surveyor/engineer for the Delaware State High Department prior to joining The Engineering Dept of the DuPont Company. He was assigned to the Civil Engineering group of the A & C department of the Design Division before and after his military service. Later he transferred to the Construction Division with assignments at the Experimental Station in Wilmington. DE. and plants at Wabash River IN., Savannah River, SC, Antioch, CA, (twice), Circleville, OH., Parkersburg, WV, Fayetteville NC, Wilmington, NC (twice) and Chattanooga TN.

Jim closed out his career with a return to the Civil Engineering group of the Design Division in the Louivers Bldg, Newark DE. At the of time of his retirement, Jan., 1981, he was made a lifetime member of the “Good Guys” a group of the A & C section of the Engr. Dept.

Upon retirement, he returned to Wilmington, NC for the third time to stay. He rejoined St. Paul’s Evangelical Lutheran Church . Served on the Congregation Council, was an original AAA disciple, chaired and served on several committees with a focus on Service and Youth activities. He worked with the Lutheran Men in Mission at St. Paul’s, served as a member of the Executive Board of the North Carolina Lutheran Men in Mission and was active at the LMM National level. Jim also participated in spiritual renewal weekends including, Via de Cristo, Teens Encounter Christ, Hesed, and Karois prison ministry.

Jim was a member of Washington Lodge No. 1, AF & AM of Wilmington, DE. and the A & A Scottish Rite of Free Masonry, Valley of Wilmington, Orient of NC.

A Celebration and Praise Memorial Service will be Saturday November 22 at 11:00 am at St. Paul’s Evangelical Lutheran Church, Wilmington, NC. The Rev John Misenheimer and the Rev. Mark Opgrand will officiate. A reception will follow in Keever Hall. A private family interment service at Oleander Memorial Gardens will be held prior to the service.

In lieu of flowers memorial donations may be made to St. Paul’s Lutheran Church or Welcome Home Angel, 1028 S. College Rd., Wilmington, NC 28403.