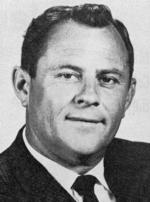 Mr. James Hampton Duncan, 85, of Sunset Beach, NC died Wednesday, January 5, 2011. The son of the late Arthur Lee Duncan and the late Bessie McCollum Duncan he was born in Reidsville, North Carolina on May 2, 1925.

Jim enrolled in the USN V-12 program at Duke University, but quickly enlisted into active duty, spending 15 months in Okinawa. After returning from Japan, he enrolled at Wake Forest University and played college football. As a member of the Demon Deacon football squad, he earned All Southern Conference honors in his final three seasons. It was also at Wake Forest that he met his future bride, Miss Elizabeth (Lib) Hellen.

After graduation he played professional football for six years with the NFL’s New York Giants. He served as team Co-Captain during the 1954 and 1955 seasons before an injury ended his playing career. In 1960, after a brief stint as the Executive Director of the Wake Forest Deacon Club, he became the Head Coach of the Appalachian State Mountaineer football team, in Boone, NC. After five years (1960-1964) at the helm of the ASU program, he headed north to the Canadian Football League, where he served as an Assistant Coach for the Saskatchewan Roughriders for four years (1965-1968) and the Head Coach of the Calgary Stampeders for five years (1969-1973). In 1971, his Stampeder squad won the Grey Cup, the championship of the CFL. In 1974, Jim returned with his family to North Carolina, embarking on a new career in sporting goods sales. After many years in sales, he became a Class “A” PGA Golf Professional, working until his retirement as the Head Golf Professional at Morehead City Country Club in Morehead City, NC. His athletic career earned him induction into North Carolina Sports Hall of Fame, the Wake Forest University Athletic Hall of Fame, and the Appalachian State University Athletic Hall of Fame.

A memorial service will be held on Saturday, January 15, 2011 at Wilmington Funeral & Cremation in Wilmington, NC at 12 noon. A reception will be held at the home of Mr. & Mrs. James H. Duncan Jr. immediately following the service.

The family extends thanks to the staff of Clare Bridge Alzheimer’s and Dementia Care Community in Wilmington, NC, and to the NFL Management Council and the NFLPA for establishing and maintaining the 88 Plan Dementia Benefits Program.

In lieu of flowers, donations may be made in memory of Jim Duncan to the Alzheimer’s Foundation of America, 322 Eighth Ave., 7th fl., New York, NY 10001.