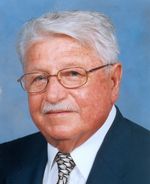 Jimmy was born August 3, 1926 in Brewton, Alabama and was the son of the late James Crook Coale and Minnie Scott Coale. He was a member of St. Paul’s United Methodist Church and American Legion Post #129, Carolina Beach. He enjoyed his wood shop, carving, fishing, and kayaking. He served his country in WWII and the Korean Conflict.

The family will receive friends 3:00 P.M Sunday April 13, 2008 at St. Paul’s United Methodist Church, 3rd and Harper, Carolina Beach, followed by a memorial service at 4:00 P.M conducted by Pastor Steve Hall. His cremated remains will be buried in Greenville, NC. at a later date.