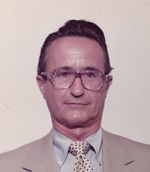 Mr. Connor was born in Augusta, Maine, on January 28, 1927, the son of the late Harry Daniel Connor and Margaret Gahagan Connor. Shortly thereafter, the family moved to Lewiston, Maine, where Jerome grew up. As a youth, he enjoyed many athletic activities, including boxing, hockey, and football.

Mr. Connor left high school early at the age of 17 to serve his country during WWII. He served in the United States Maritime Service and sailed on the S.S. Duke Victory in the Pacific. After the war, he returned to Auburn, Maine, where he graduated from Edward Little High School in 1947.

As a young man, he was very active politically. He served as the President of the Young Democrats of Lewiston. He was later appointed to the staff of Senator Frederick Payne (R) of Maine in Washington, D.C. Deciding to pursue a career in law, he took courses at George Washington and Georgetown Universities. He received a law degree from Georgetown University in 1959 and passed the Virginia Bar that same year.

He then went to work as an attorney for the National Labor Relations Board in Washington, D.C. He moved to Winston-Salem, N.C. in 1965, where he continued to work for the N.L.R.B. until his retirement. Mr. Connor was very proud of the fact that, as an attorney working in the labor relations field, he devoted much of his career to defending the rights of working men and women.

In 1997, he moved from Winston-Salem to Wilmington, N.C. to be closer to his family. He was a devoted father and grandfather who loved to spend time with his family. He was affectionately known as “Pepaw” by his grandchildren and many others. His hobbies included travel, swimming, reading philosophy, and listening to jazz.

Surviving are his ex-wife and close friend Carolyn, son Michael and his wife Linda, two grandchildren Chelsea and Sean, all of Wilmington, a brother Harry L. Connor of Old Saybrook, CT, and numerous nieces and nephews. Remembered are his sister Margaret and brother Kenneth, who predeceased him.

A memorial service will be held at 4 PM Saturday, July 5, 2008 at 3915 Oleander Drive in Wilmington, followed by a reception for friends and family at the home of Mike and Linda Connor from 6 to 8 PM. Flowers and condolences may be sent to: Connor, 604 Macon Court, Wilmington, N.C. 28412.