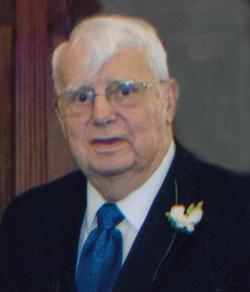 Jerry Wenger, age 83, born July 19, 1931 in Grand Rapids, Michigan, still madly in love with his wife, Dolores (Crips/Wieck), after 60-plus years, passed away suddenly on January 20, 2015 at his home in Wilmington, North Carolina.

Jerry served in the US Navy during the Korean Conflict before settling into marriage and family life, supporting his growing family first by working for the City of Grand Rapids, Michigan, while attending Grand Rapids Junior College. From there he went on to serve as Assistant Manger and then Manager of the Beneficial Finance and Commonwealth Loan companies in Grand Rapids, Kalamazoo, and Sault Ste. Marie, Michigan. After that he served as Manager of Grand Valley Co-op Credit Union in Grand Rapids, Michigan, finally retiring as the President/CEO of the Gerber Products Federal Credit Union in Fremont, Michigan. After retirement, Jerry and Dolores lived first in Goose Creek, South Carolina and, most recently, here in Wilmington, North Carolina. Jerry loved people, and never forgot a single soul that he had ever met.

Jerry was predeceased by his parents, Gerald Isaac and Edna May (Zuidema) Wenger, and by Dolores’s parents Harold and Wilma (Woodrick) Wieck.

Jerry never ended a phone conversation with his children without saying “I love you,” nor without sending his love to their children. Nor did he ever forget to remind his children that he “would have never amounted to anything, or probably even survived, without Dolores.” Jerry was an honest and a good man, a sinner saved by grace through faith in the Lord Jesus Christ – a Christian man. He will be greatly missed, and never forgotten.