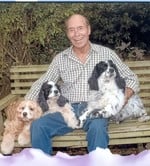 Jerry Ward
Jerry a.k.a. “J.W.”, “Pops”, “Dad”, Uncle Jerry and Grandpa had life which was full of personal and professional accomplishments. From his early adult life as most valuable football player at Blountstown High School in Florida, he was motivated to serve his country in the National Guard. At age 20, he met the woman who would become his wife and the mother of his children.

Jerry’s athletic interests were instilled in his children as well as those fortunate to be coached by him in baseball and football at Winter Park Optimist Club.

Jerry’s career included being an insurance salesman for American Nationals, an appliance sales manager at J. M. Fields, personnel manager for Snelling and Snelling, salesman with Blake’s Television, and owner/operator for a general contracting business.

Upon retirement, Jerry was instrumental in owning and operating the Raven’s Eye Bar and Grill. This was home for the Cape Fear Rugby Club and the Cape Fear Dart Association.

In his later years, Jerry was the center of his friends attention in front of the widescreen television rooting for Jeff Gordon and the Washington Redskins. His greatest smile was seen while cooking a full grill of food while bragging about having the best barbeque sauce in town.

His greatest accomplishment was the love he shared with his family, devoted friends, and his faithful companions to the last moments of his life, his three cocker spaniels. Jerry will be missed greatly.

We invite you to share your fondest memories of Jerry at the gazebo near Johnny Mercer’s from 6:30 PM until on Thursday, September 17, 2009.

In lieu of flowers memorials may be sent to Victory Junction Gang, 4500 Adams Way, Randleman, NC 27317