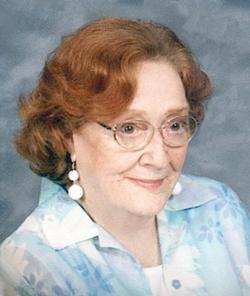 In May, 1943, Ralph’s plane was shot down over Belgium. Having survived, Ralph Moffett became a POW at the infamous German camp Stalag XVII near Vienna, Austria. Upon his return from Europe, Ralph contacted Joan and asked her to marry him. On May 10th, 1946, after flying from Shannon, Ireland to New York City and traveling by train to Atlanta, Joan and Ralph were married. Soon, Greensboro, N.C became their home for over 30 years.

Joan organized a Group for Young English War Brides, which participated in many noble causes and eased the Britt’s transition to their new Southern social life.

Joan was an excellent organizer, and a great cook who hosted wonderful parties at her home in Sedgefield, near Greensboro. The Lord did not give Ralph and Joan children of their own. They decided to channel all their love through a “Foster Parents Program” that enabled them to become involved in the education of poor children around the world.

They were foster parents of children in Italy, Bali, Bolivia and Colombia. In 1967, Joan and Ralph became foster parents of a 10 year old girl from Bogota, Colombia, Leyla Lombana. In 1976, 19 year old Leyla, who had finished her High School with honors, was rewarded with a month trip to visit her foster parents in Greensboro.

The love between Ralph, Joan and Leyla, flourished, and Leyla returned to Colombia, married and had 2 little boys.

In 1981 Ralph retired and the Moffetts built their new home in “King’s Landing”, Hampstead, N.C. Ralph P, Moffett died in 1985. Joan became a parishioner of Saint Mark Catholic Church, in Wilmington N.C., and in 1990, she moved to Inland Greens, a lovely retirement community in the Port City.

Joan worked as a Pink Lady for New Hanover Hospital, helped with the Meals on Wheels program, loved to play Bridge, and became a Eucharistic Minister, visiting the sick and bringing them Holy Communion.

In 1988, a man from Bogota, Colombia, Juan Rueda, became a member of Saint Mark Catholic church and got involved with their Hispanic Ministry. That is how the Lord, working in mysterious ways, brought Joan and Juan together. On March 19th, 1992, Juan M. Rueda married the widow Joan Teresa Moffett and, at age of 45 became the father of 35 year old, Leyla, and the grandfather of Danilo (10) and Sergio (6). In 1993, Leyla Lombana and her husband, Alberto Sanchez, had a little girl, Laura Camila Sanchez Lombana.

During the last 23 years, Joan T. Moffett Rueda and Juan Rueda, have traveled many times to Colombia, and were able to contribute to the education of both children. Today, their grandsons are professionals living in Bogota: Danilo (33), a Medical Doctor; Sergio (29), a Dental Surgeon. Laura Camila (22) will graduate as a lawyer this July.

Joan will forever be remembered as the most loving Mother, grandmother, Wife, Aunt, and, for the last 5 years, great grandmother of Marianita, Danilo’s little girl.

All the family is very sad with the departure of their Matriarch, but also filled with the joy of knowing that Joan Teresa Bernardette is now with Our Lord.

The Family would like to thank Dr. John Boldizar and his staff and the nurses and staff of Lower Cape Fear Hospice & LifeCareCenter for their compassionate care.

May she Rest in Peace.

A Mass of Christian Liturgy will be celebrated on Tuesday, April 21, 2015 at 7:00 PM at St. Mark Catholic Church with Father Patrick Keane officiating.