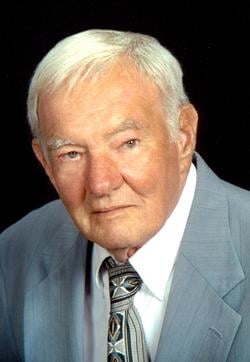 John Banks Talley died June 17, 2015 at his home. John was the son of the late Dr. John Samuel Talley and Edith McLaughlin Talley. He was born May 31, 1924, in the Statesville, NC hospital, delivered by his father, the beloved “Dr. Sam” Talley. John grew up in nearby Troutman, NC, in a large old house that is now the very popular Talley House Restaurant.

John was baptized and grew up in the American Associate Reform Presbyterian Church. He joined Saint Paul’s Evangelical Lutheran Church in Wilmington, NC when he married his wife Melissa. At St. Paul’s he served as a Christian caregiver and on an usher team.

John is a graduate of the 1941 Class of Troutman High School. In 1943, John joined the United States Navy where he served his country with honor in World War II. He was selected to be in the Navy Medical Corp and was embedded with United States Marines in the Pacific. John served as a medic on ships traveling to the Pacific and on the islands of Guam, Roi and Namur. He also served in hospitals in Hawaii.

Following his service to his country, John returned home and attended and graduated from the University of North Carolina at Chapel Hill earning a Bachelor of Science degree in chemistry. John returned home to Iredell County and founded a contracting company. He supervised the building of several large chemical and electric plants in the south.

John served his hometown, Troutman, as a city alderman and also as mayor pro tem.
While living in Charlotte, John served as a Boy Scout leader for Troop 6 of Mulberry Presbyterian Church for which he received several leader awards including The Order of the Arrow.

John was an accomplished craftsman who built four houses with his own hands, including the country house he built as his Wilmington home. He was also an avid boatman and fisherman.

John was very interested in agriculture and gardening from a young age encouraged by his parents. While living in the country, he grew much of his food. When he married Melissa and moved to her garden on Metts Avenue, he became very interested in camellia culture. He was a member of the Hobby Greenhouse Club, where he met his wife, Melissa, and The Tidewater Camellia Club, and for his work in both organizations, he was awarded life memberships. He was also a member of the Wilmington Cape Fear Rose Society, The American Camellia Society and The American Hemerocallis (Daylily) Society.

A memorial service will be held at 2 pm on Monday, June 22nd at Saint Paul’s Lutheran Church, 6th and Market Streets, followed by committal of his ashes in Saint Paul’s Memorial Ash Garden. The Reverend John Misenheimer and the Reverend Mark Opgrand will be officiating. A reception will follow in Saint Paul’s Keever Hall.

In lieu of flowers, memorials may be made to Saint Paul’s Lutheran Church, The Boy Scouts of America or a charity of your choice.