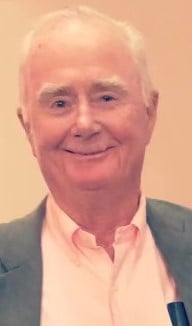 John Bruce Edwards 85, of Winnabow, North Carolina passed away peacefully on Thursday, May 19, 2022 at Novant-New Hanover Regional Medical Center in Wilmington after complications related to a stroke.

Bruce, as he was known to his friends and family, was born in Philadelphia, Pennsylvania to John Allen and Margaret Theresa Doll Edwards. He spent the majority of his youth in the New Bedford area of Massachusetts. In large part, Bruce’s family were commercial fisherman. Though he loved to fish recreationally, he decided the life of a commercial fisherman was not for him. He asked his mom to sign papers allowing him to enter the United States Army at a the tender age of 17 and very proudly served his country for 20 years. While deployed in France, he met the love of his life, a beautiful Scottish gal named Eleanor Freeman, on a blind date. They married 6 weeks later on December, 23, 1963 in Paris, France. Among the honors and awards he received throughout his career, the Bronze Star Medal for Meritorious Achievement in Ground Operations Against Hostile Forces in Vietnam was at the top.

Once he retired from active service, Bruce continued to work for the United States Government for an additional twenty years in a variety of civil service positions centered around public affairs. His last position held was as the Chief of Public Affairs for the Military Traffic Management Command in Falls Church, Va where he retired as a GM14. He retired in 1993 and moved to North Carolina with his wife Ellie, by his side.

A self described “high school drop out”, Bruce earned his General Education Diploma while serving in the military. He went on to earn his Associate of Arts Degree at the College of Lake County and Bachelor of Science degree from Southern Illinois University.

Post retirement, Bruce (never one to sit still) quickly found himself selling boats, which surprised no one who knew him. After all, it was the best way to get a discount for his own boat, which was aptly named “miss Ellie”. The lowercase “m” for the “miss Ellie” was not a grammatical error. Rather, it was intentional because he missed Ellie, when he was out on his boat. It quickly became a double entendre as he gave Ellie the monicker “Miss Ellie” soon after. He later worked as a “bag boy” for Carolina National Golf Course. Though he never golfed, he loved to collect golf balls for his grandchildren to play with.

No one could tell (and repeat) a story like Bruce Edwards and he was quite a character! In fact, one was never quite sure if he was telling a true story or pulling your leg until the end. He had a fun personality and when asked how he was doing, he often responded “If I was any better, I couldn’t stand it” …. and he meant it! His family is hoping to channel that attitude as they mourn the loss of this special man.