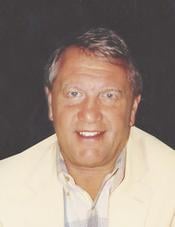 John Burgess Matlock, age 71, of Wilmington passed away Monday August 5, 2013 at New Hanover Regional Medical Center with his family by his side.

He was born in Greensboro, NC on August 25, 1941. His parents were the late Gordon Ware Matlock and Sally Tesh Matlock.

John was a long time resident of Wilmington. He was actively involved in the Weekend Meals on Wheels program. He was a member of the Wilmington Lodge #532 B.P.O. Elks.

John was a standout football player at Norview High School in Norfolk, Virginia where they won the state championship in 1958 and he was selected as an All-State player. His excellent high school play caught the eye of Bobby Dodd and he was offered a football scholarship from Georgia Tech. There he continued his love of the sport as a center and linebacker for the Yellow Jackets from 1959-1963. Following his successful years on the gridiron, John began a career of coaching using his leadership and strategic knowledge of the game. Beginning at St. Pius High School in Atlanta and it wasn’t long before he was coaching the National Championship team from Randolph Macon in Virginia as well as coaching positions at the University of Louisville, East Carolina University and eventually becoming the defensive line coach for the University of North Carolina. Along the way, John established strong bonds of friendship with his players and teammates. Those bonds have lasted for decades and his loss will be felt deeply by those who had the joy of spending time with him on and off the field.

A memorial service is planned for 2 PM Thursday August 8, 2013 at Wilmington Funeral Chapel.

The family will visit with friends immediately following the service.

In lieu of flowers, memorial donations may be made to Weekend Meals on Wheels, PO Box 3593, Wilmington, NC 28406.