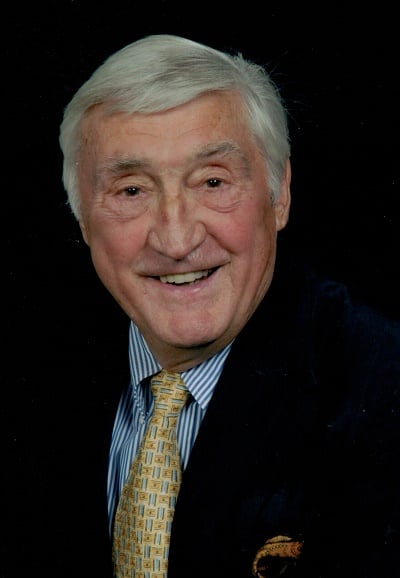 John Calvin Houser of Wilmington, NC, was born in Grover, NC, on March 4, 1933. He died on February 9, 2019, at Lower Cape Fear Hospice. He graduated from Grover High School in 1952, joined the US Navy, and served on the Coral Sea for three years. He later attended and graduated from the University of South Carolina and remained the ultimate Gamecock fan. It was there he met his wife, Connie Lofgren, whom he married in 1959. They were married 59 years. He majored in business, worked at the Russell House and bookstore, was a PKA and a USC senior class officer, and embraced the entire college experience.
After college, he began his career in banking, starting at Wachovia and becoming the President of Carolina State Bank in Gastonia, NC, a true hometown bank which later merged with Southern National Bank. He was a graduate of the LSU School of Banking, served on the North Carolina Banking Commission, and later retired from BB&T.

He served on the USC Foundation Board, on the USC Development Foundation and Board of Visitors, and as president of the USC Alumni Association. He was on the Salvation Army Advisory Board for over 33 years and was a member of the Gaston Country Club, the Chamber of Commerce, the Heart Society, the Gastonia Sportsmen’s Club, the United Way, and many other civic and professional organizations. He enjoyed making new friends in Wilmington at the Senior Men’s Club.

He was the proud father of Dr. Amy Lynn Houser of Raleigh, NC (husband Geoffrey Dick) and Paige Shannon Houser (husband Laurence Bergman).
He was a doting and loving Pop-Pop to Max Houser Bergman and Lil Houser Bergman and Alexander John Dick and Gianna Lynn Dick.

His greatest treasures were his family and friends, his lifelong affiliation with USC, and his tomato crops and flower garden. His sense of duty was devout as he was a lifelong Presbyterian, serving as a deacon and elder at First Presbyterian Church in Gastonia, and after the move to Wilmington at Little Chapel on the Boardwalk in Wrightsville Beach. He was a loyal friend, neighbor, and citizen. He was a great dad and loving husband. He loved to read, loved his cat named “JC,” loved a fresh peach, and played a decent round of golf.

A celebration of life service will be held on Saturday, February 16, 2019, at the First Presbyterian Church,1621 E. Garrison Blvd., Gastonia, NC, at 1:30 pm with a reception to follow in the church fellowship hall.

Friends and neighbors are invited to a reception at the Houser home, 5044 Whitner Drive on Thursday, February 14 from 3:00-6:00.