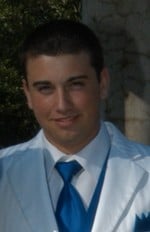 Born in Springfield, Massachusetts, on September 2, 1989, he was raised in Ware, Massachusetts until 2001. He was an athlete from his T Ball days to soccer, football and his first love, baseball. After moving to Wilmington in 2001, he played baseball pretty much year round for several years, from recreational to AAU to legion and high school baseball. He played baseball on several All Star teams and played JV and Varsity Baseball for E. A. Laney High School. After graduating, he attended Cape Fear Community College, where he was working toward a degree in business administration. He was planning to attend the University of North Carolina at Wilmington in the fall. He was employed by Finish Line and Best Buy in Wilmington.

He leaves behind his parents, Michael and Tina Rossi of Wilmington, and two brothers, Michael Jr. and Steven , both of Wilmington, and his Maternal Grandmother, Alice Hubbard of Agawam, Massachusetts, several aunts and uncles and dozens of cousins and hundreds of close friends.

Memorial service will be 2:00 PM, Saturday, January 30, 2010 at Northside Baptist Church where the family will see friends after the service.

In lieu of flowers please make donations to your local chapter of the D.A.R.E. program