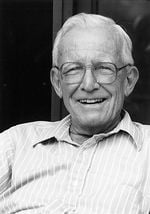 GREENSBORO, N.C.—After an extended illness, John E. Crutchfield Jr. moved on to higher ground Saturday, November 17, 2007 in Wilmington where he had lived for the past 3 years.

“John E.” was born in Burgaw, N.C. In 1918. The youngest of 5 siblings, his family moved to Greensboro when he was 6 years old, where he resided until his recent move to Wilmington.

During his education at Western Carolina, he was elected president of his freshman, junior and senior classes. There he met and married the love of his life, Sara Avaline Patton from Swannanoa, N.C., who preceded him in death. After graduation, he served in the US Navy as a lieutenant during WWII.

He joined Burlington Industries after the war where he remained a plant manager for most of his professional career. He was a past member of the Greensboro Jaycees, First Presbyterian Church, and Starmount Country club where his golf talents led to his winning several club tournaments.

In the late 1940’s, he and a few neighborhood friends in the new development “Kirkwood”, celebrated the 4th of July by marching around the block with their kids, flags, animals and noisemakers. This was the first of the now annual Kirkwood Parade.

“John E.” loved music and dancing (in his earlier years), collegiate sports, and the ocean at Topsail and Wrightsville beaches, where he braved the surf up until his early 80’s.

He was loved and will be greatly missed by his daughter Martha Crutchfield Friesinger and husband Jim of Wilmington, a son John E. Crutchfield III (Jackie) and wife Rebecca Willitts Crutchfield of Greensboro. Grandchildren Kyle and Will Friesinger, and Sydney and Weston Crutchfield lit up his eyes and spirit like no one else could.

A memorial service and reception will be held at 11:00 a.m. Saturday, November 24th at Guilford Park Presbyterian Church, Greensboro, NC

The family would like to give special thanks to Lower Cape Fear Hospice for all of their care and concern.